A few quotes from the past 5 months:

From Juan our guide at Tikal "personal property isn't lost in Guatemala, it just finds a new owner".

From Jesse, fellow adventure rider from Ottawa: "You know when you think about it — a lot of what we are doing is legitimately dangerous". He is talking from experience as he had a serious crash while trying to avoid another motorcyclist who made a turn (without signaling) in front of him.

From Robin, our guide while taking a boat tour in the Amazon jungle and informing us of the number of species of fish in a lake he then adds: "this lake also contains many species of I phones, camera's, laptops and purses".

From Alex, fellow rider and Stahlratte passenger describing us on her and Nathaniel's blog: "At just over 50 years old with grey hair, a serious tan and standing over 6’4” in his motorcycle boots he was not the most likely person we expected to join our party. His wife was out front and at barely 5 feet tall they make quite the pair riding two up on his 1200GS BMW motorcycle."

From Jesse, "what a shit hole" when referring to a situation or place he didn't like.
An announcement  on the ferry during the sailing between Buenos Aires and Colonia, "Our food services are now open to take care of your dire desperation". I suspect they used Goggle Translate for the translation. In my years of ferry travel I have never been desperate to have a meal prepared on a ferry.

What worked and what didn't:
Diana;
I really liked my Revit pants and jacket and the only thing that I would do different would be to buy a black jacket so that it would stay cleaner looking, the light grey gets to look grubby really quickly. I chose Revit because they are one of the few brands that make riding gear for shorter people, but after wearing the gear almost every day for five months for long periods of time I would recommend it to anyone: it is lightweight, fits very well and with the waterproof liners in place you stay dry.  My Alpinestars Newland Gore-Tex boots withstood the water test and were totally waterproof and great for walking in. The Arai XD4 helmet I loved; lightweight, comfortable, good venting and the visor keeps a lot of the sun out of your face. It was expensive, but well worth it I thought.
Ken;
I found the Klim riding gear too heavy and hot for most of the trip and would have preferred a non Gore-Tex jacket and pants with a two piece rain suit for those few days of wet weather. The Sidi Adventure Gore-Tex boots saved my ankles on more than one occasion and although my feet were hot it was worth it for the protection. The Arai XD4 helmet is the best helmet I have owned, it has great ventilation, the sun visor although large has great aerodynamics and most days you wouldn't know it was there. 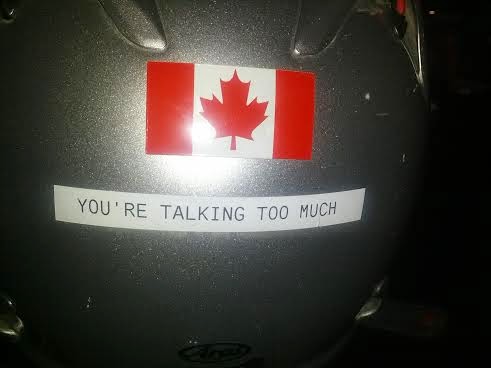 This was the message on the back of my helmet, just a reminder to Diana that just because we had helmet communicators she didn't need to talk my ear off. Both Diana and Mark accused me of talking too much as they were always waiting for me while I talked with the locals .
The BMW performed flawlessly over the 28,818 kilometers that we traveled. Other than regular maintenance, the only repairs required were one headlight and one signal bulb along with 2 sets of rear brake pads. It's a good thing that the bike was reliable which is more than I can say about the BMW dealer network. I would however highly recommend the dealers in Lima, Peru and Montevideo, Uruguay, both had good parts departments that worked closely with the service department.
The Heidenau K76 tires were great on the asphalt and dirt but the K60 tires were better in sand and gravel. They were both long lasting when you consider how much weight we were packing and the road surface temperature. 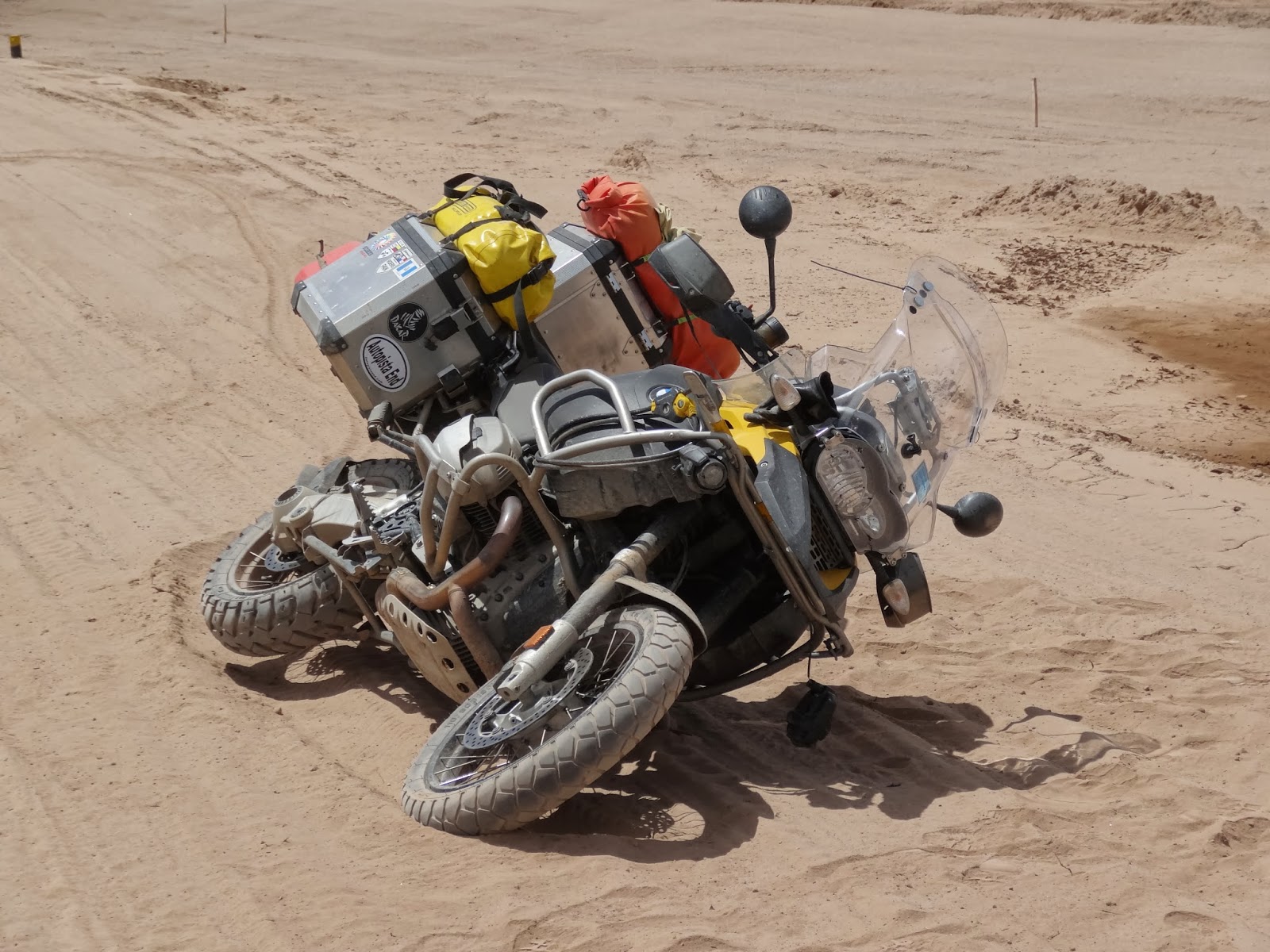 *Number of flat tires, 0 (I still can't believe it, this was one of my     biggest concerns during the planning of this trip)
*Number of tires replaced during trip, 2 rear and 2 front tires.
*Number of hours spent in "Sex Hotels": one night was enough (in El Salvador immediately after crossing the border) but Diana doesn't like to talk about it, man that mirror on the wall was huge!
*Number of times with food poisoning: I quit counting after Medellin, Columbia.
*Best sights: Machu Picchu in Peru.
*Worst sights: Discarded dogs, particularly in Bolivia where they were literally stacked on the side of the roads.
*Favorite country: Each country was special in one way or another so it's difficult to come up with a favorite and really, it was the people we met who made their country special.
*Worst day: (other than being ill for 2 months) getting lost in the Bolivian Andes and not knowing where we were or how to get to Chile. I still feel terrible for not giving the four young girls we met my M&M's that day.
*Best day: many, they always included fellow bikers or making a personal connection with the locals.
*Scariest day: actually happened at night (on the highway during a thunder and lightening storm) nearly having a head on collision with a semi in Mexico. We can only mention it now as mom would have worried non stop had she known.
Diana also witnessed a dozen people being lead into the forest by a guy carrying a machine gun while we were passing through a Mexican village, her words to me were "don't stop, just drive!"
and it was only later that I learned why. * Windiest day: Mexico, as Taylor described in his blog: " Today we dealt with 70mph gusts that nearly took myself and Ken off the road and into the ditch. We both has several very close calls." The winds in Patagonia were relentless but didn't gust like they did in Mexico.
*Worst photo: Diana was so proud of getting some photos of the foxes at the Chile border that she didn't realize she caught the fox taking a dump until Mark and I started laughing. Actually, not true, oh, the photo part is, but him and Mark only knew because I told them because I was a little mortified when looking back at the picture and realizing what I had taken. Oh well, not the first tasteless photo that's been taken, I'm sure! 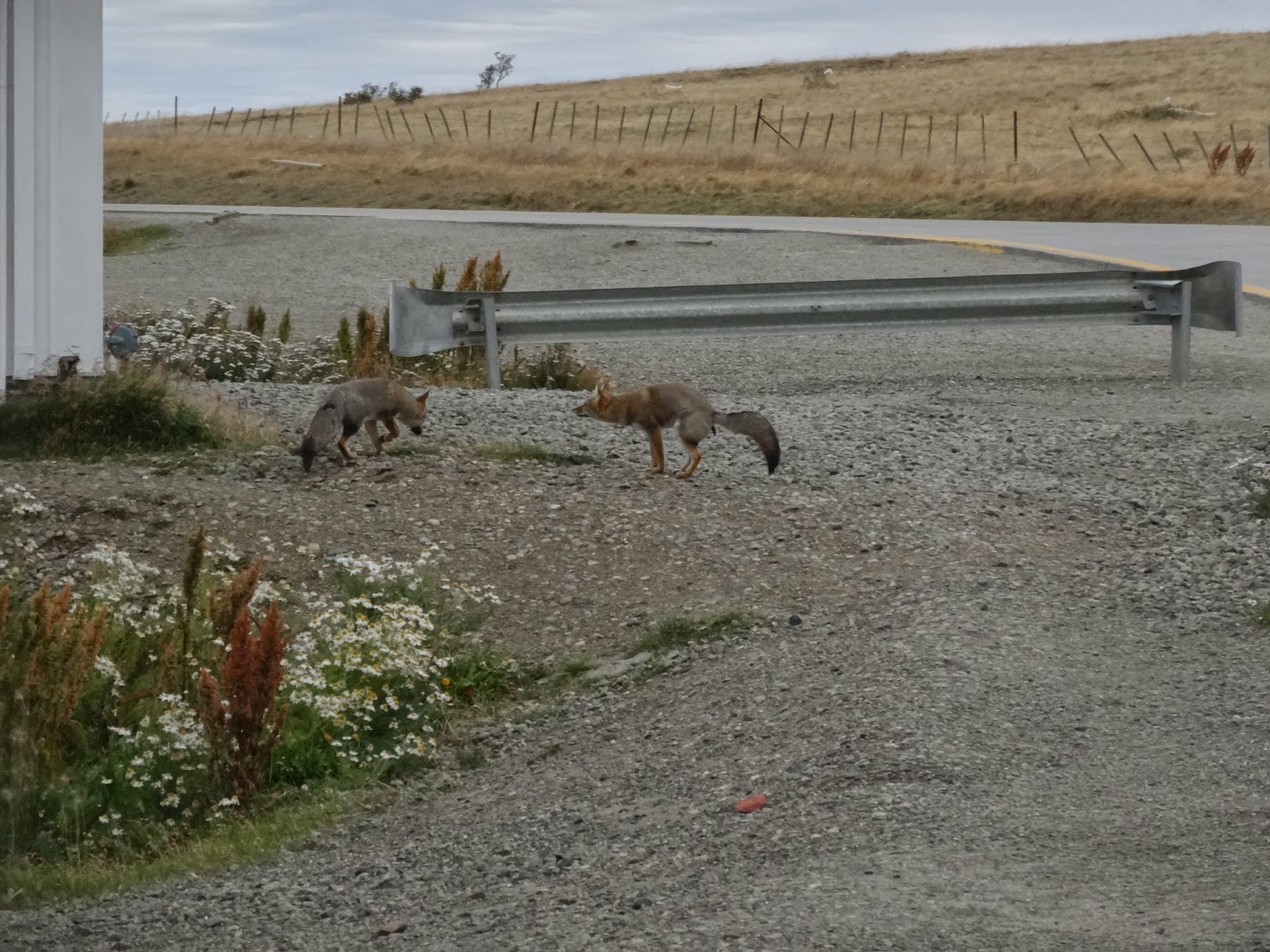 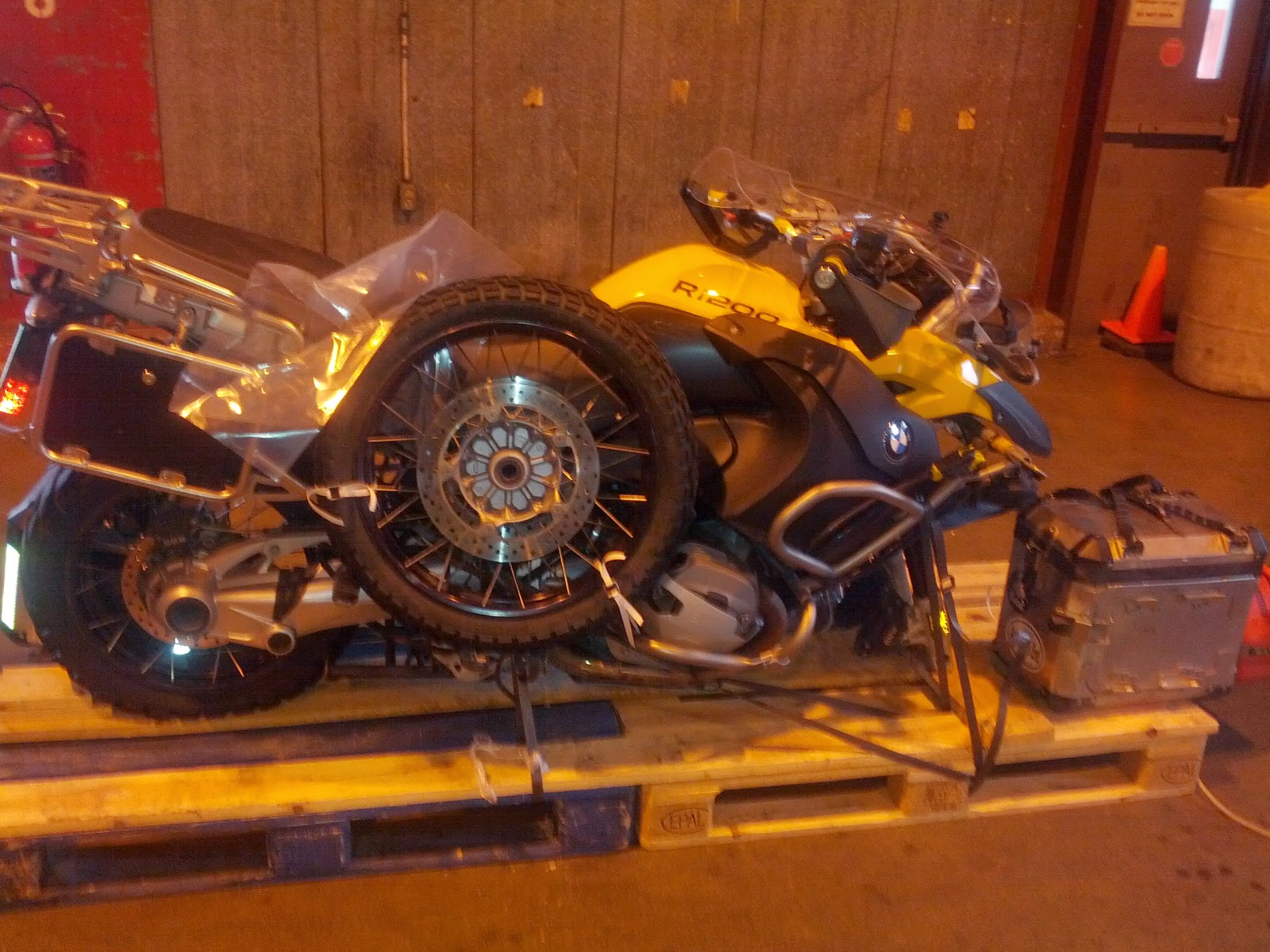 The bike arrived in Vancouver without any damage and on schedule. The Air Canada Cargo employees in both Argentina and Canada were terrific from the first email to helping put the front wheel back on the bike. 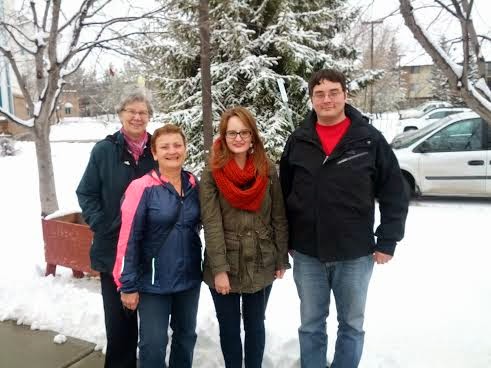 Mom, Diana, Karman and Kirk in Edmonton, we really could have done without the spring snow to greet us.

After such a prolonged period of time on the road I'm thinking that Diana may need a refresher course in domestic duties as she may not remember how to clean house, cook a meal or turn on the washing machine.
For you bikers out there, just remember; Ride hard, you can rest when you're dead!

Next trip will be to Alaska via the Dempster Highway to Inuvik, NWT in mid 2015.

Thanks to all who provided words of encouragement, we really needed them at times.