Arrived in Panama City on December 30th and the traffic for the last hour was horrible. Firstly, we get pulled into a vehicle inspection station that is only targeting motorcycles. The policeman won't accept copies and wants the original import documents for the bike, drivers license and passports. (we usually hand over copies rather than original documents, that way we can't be held for a bribe in return for the originals) I play along with my usual "no habla espanol" and we are on our way within 5 minutes. The bridge over the Panama Canal is undergoing repairs and traffic is backed up about 5 kilometers so we drive on the shoulder or "white line" between rows of vehicles until we reach the bridge deck and fall into line with all the other vehicles. I'm certain I'll get caught for these illegal moves at some point but it's such a time saver that it's worth the risk.

Once in Panama City we went directly to Bavarian BMW to get the brake pads replaced, tune up and repairs done to the rear fender bracket which was hanging on by one bolt. The loose fender happened due to the extremely rough roads we were on between Santiago and Anton, the rear suspension was bottoming out and the fender kept hitting the tool box. We finally get the bike back at 5 pm and consider ourselves luckier than another biker who is unable to get his bike fixed until January 6th.
After a number of crappy hotel rooms we decided to settle into the Holiday Inn Express in downtown Panama City to enjoy a clean room with all the amenities for New Years. Diana stayed with the bike while I went to check in, when I return 30 minutes later she wants to know what took so long. It happens frequently, people find out where you're from and want to hear about the adventure. Miguel (the hotel Manager) and a few of the staff couldn't do enough for us during our stay. We had our riding jackets and pants laundered in the hotels large washing machine as they smelt awful from our constant sweating in them and they don't dry due to the high humidity. Miguel met us at breakfast and told us about growing up in Venezuela and gave us pointers on what to see when we get to Peru as he managed some hotels there. 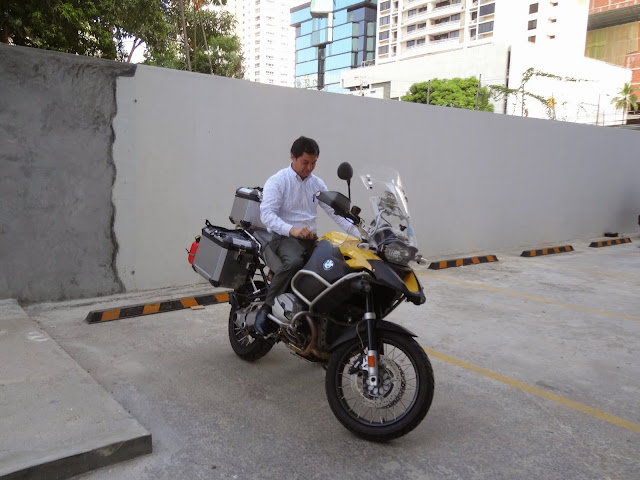 Miguel trying the BMW on for size, he planned to show his wife the photo and tell her that he purchased a new toy for a new years gift.
He also had a fruit plate delivered to our room on New Years Eve which we very much enjoyed. Our hotel room is awesome with a brand new king size bed, 40" TV, desk, more plug ins than we need (most hotels we've stayed at only have 1 plug in) to recharge all of our electronics. I'll take this opportunity to catch up on banking and emailing. 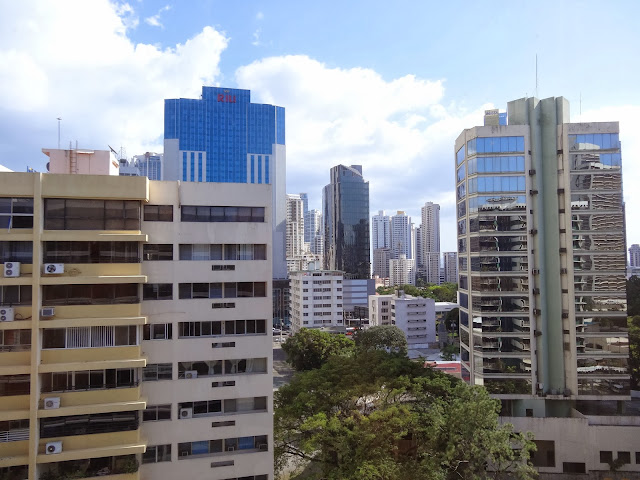 Panama City as seen from our hotel room. 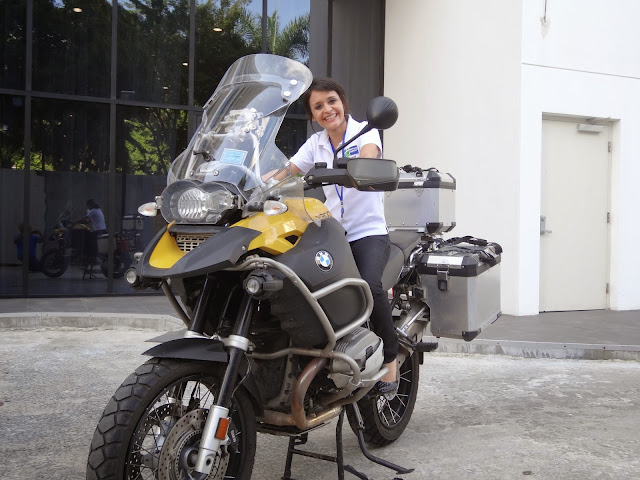 Leidy
Leidy who works in the hotel restaurant waited until I went up to the room before asking Diana if she could have her photo taken on the bike. When I returned to the restaurant Diana filled me in on her request so I asked her (using Goggle translate) if she was ready to have her picture taken and she didn't waste any time shedding her hair net and jumping onto the bike for the photo opp. We are sure it made up for her having to work New Years day.
﻿
Posted by Ken at 5:38 AM