January 3rd the best and the worst of boat life 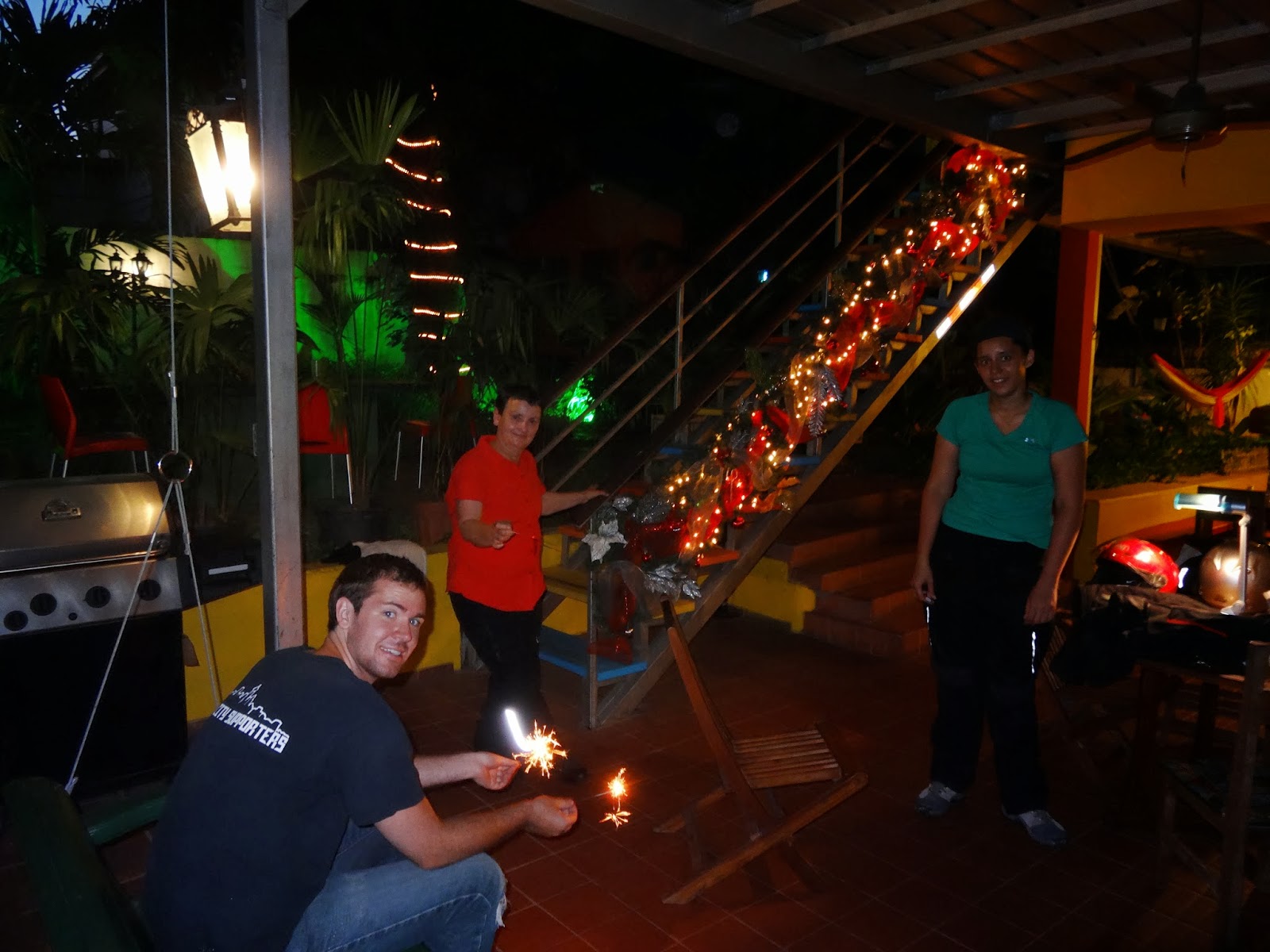 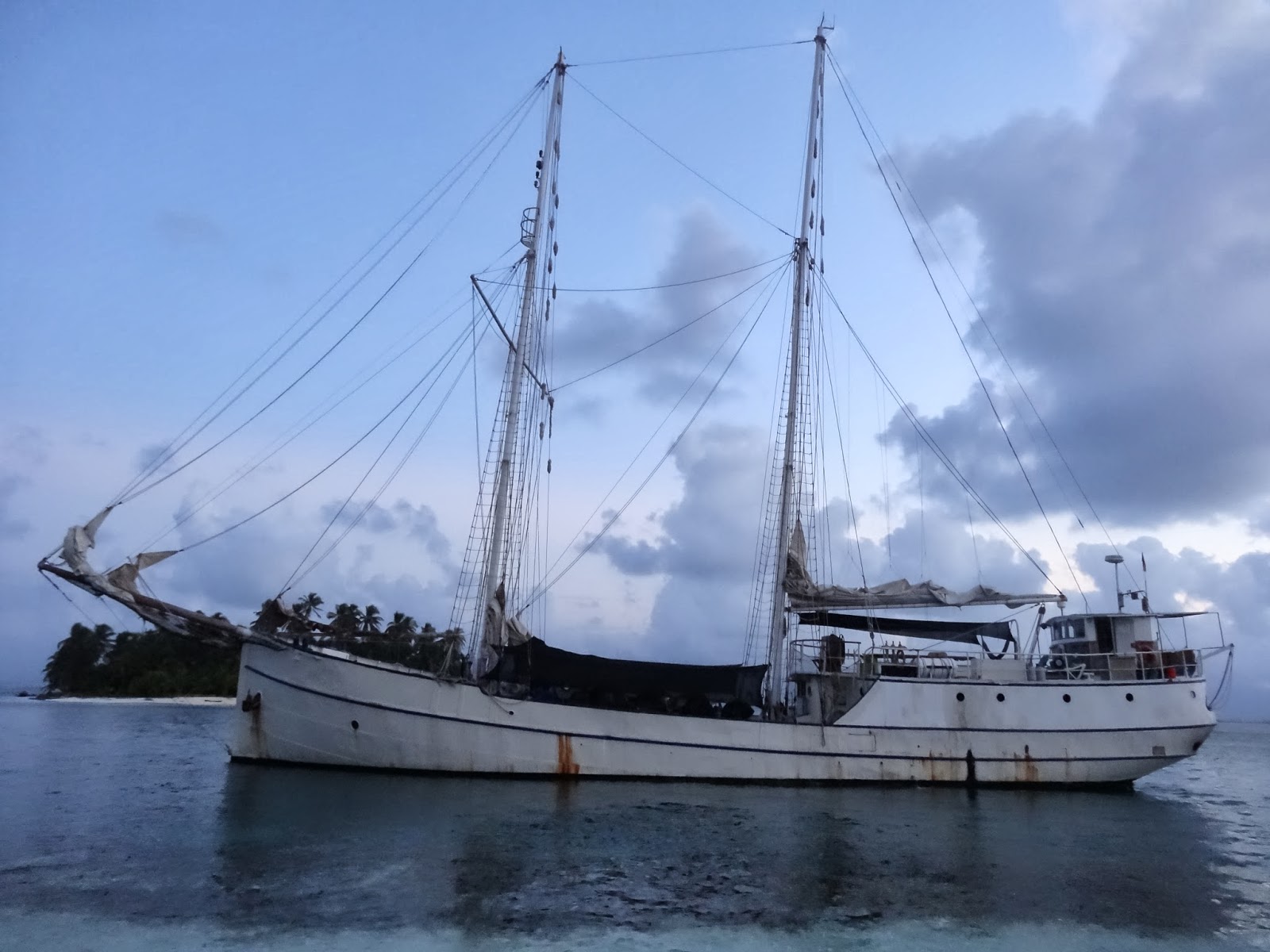 We have a quick bite to eat at the Panama House bed and breakfast before hitting the road about 6:30 am and I somehow get elected to lead the five other bikers through the morning traffic rush. We are traveling with Taylor from Bellingham, WA who we met earlier in Mexico, Alex and Nathaniel from the San Francisco Bay area, Jesse from Ottawa, and Nicolas (aka Chile) from Delaware.  In an earlier post I had said we were going to Colon but it is actually the Port of Carti that we are to meet the boat. When we arrive we can see the boat is anchored in the bay and some Kuna (indigenous people) are running beside us and pointing where we should go. We are directed to drive to the end of a concrete dock where the bikes are stripped of all their luggage and panniers. All of us were expecting to load our bikes into Zodiacs for the transfer to the sailboat but because of high tide they brought the sailboat to the dock and hoisted them onto the deck. The loading took about half an hour and then we settled into our quarters and had another breakfast on the boat. 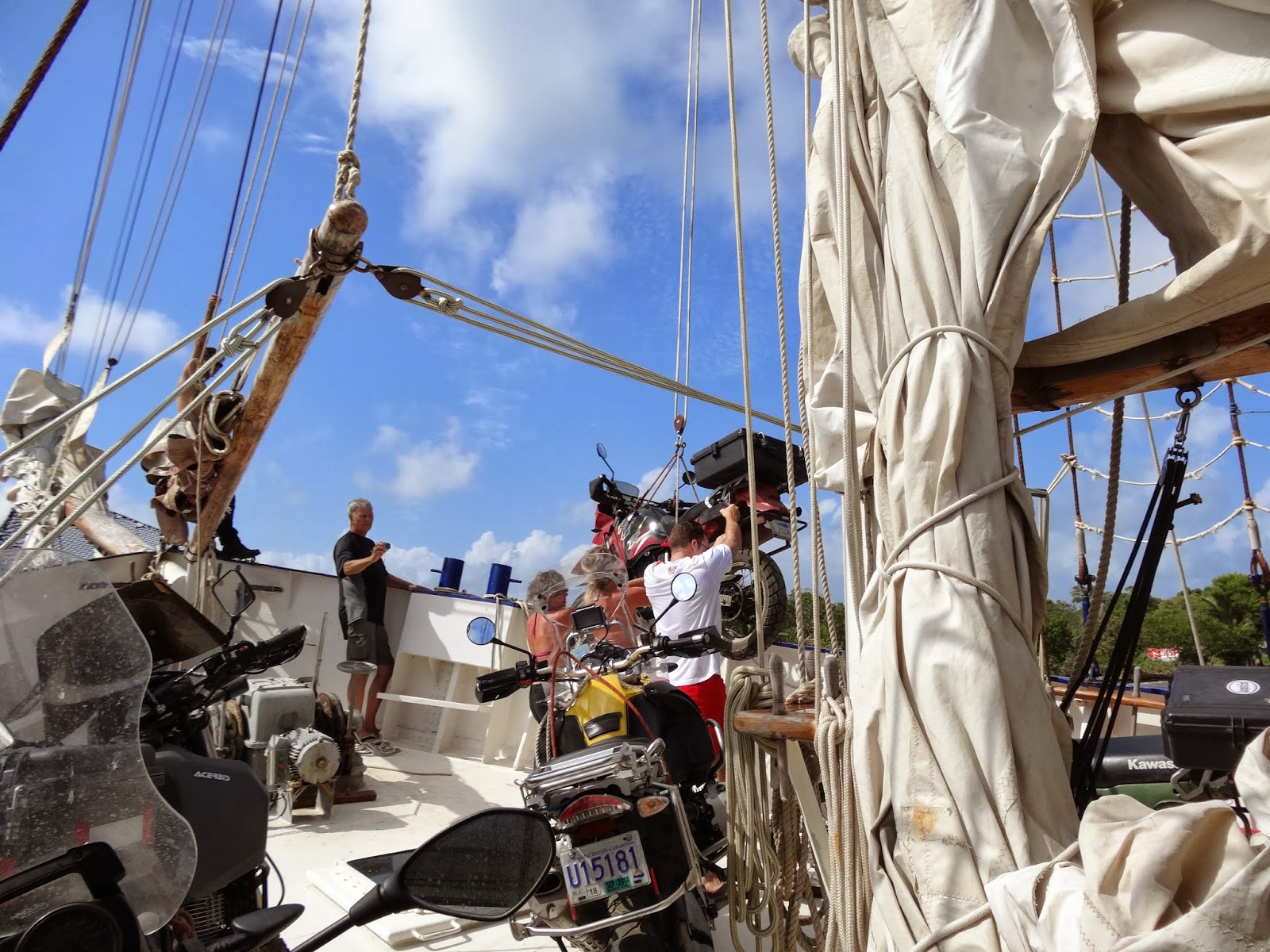 Moto's getting hoisted onto the deck. 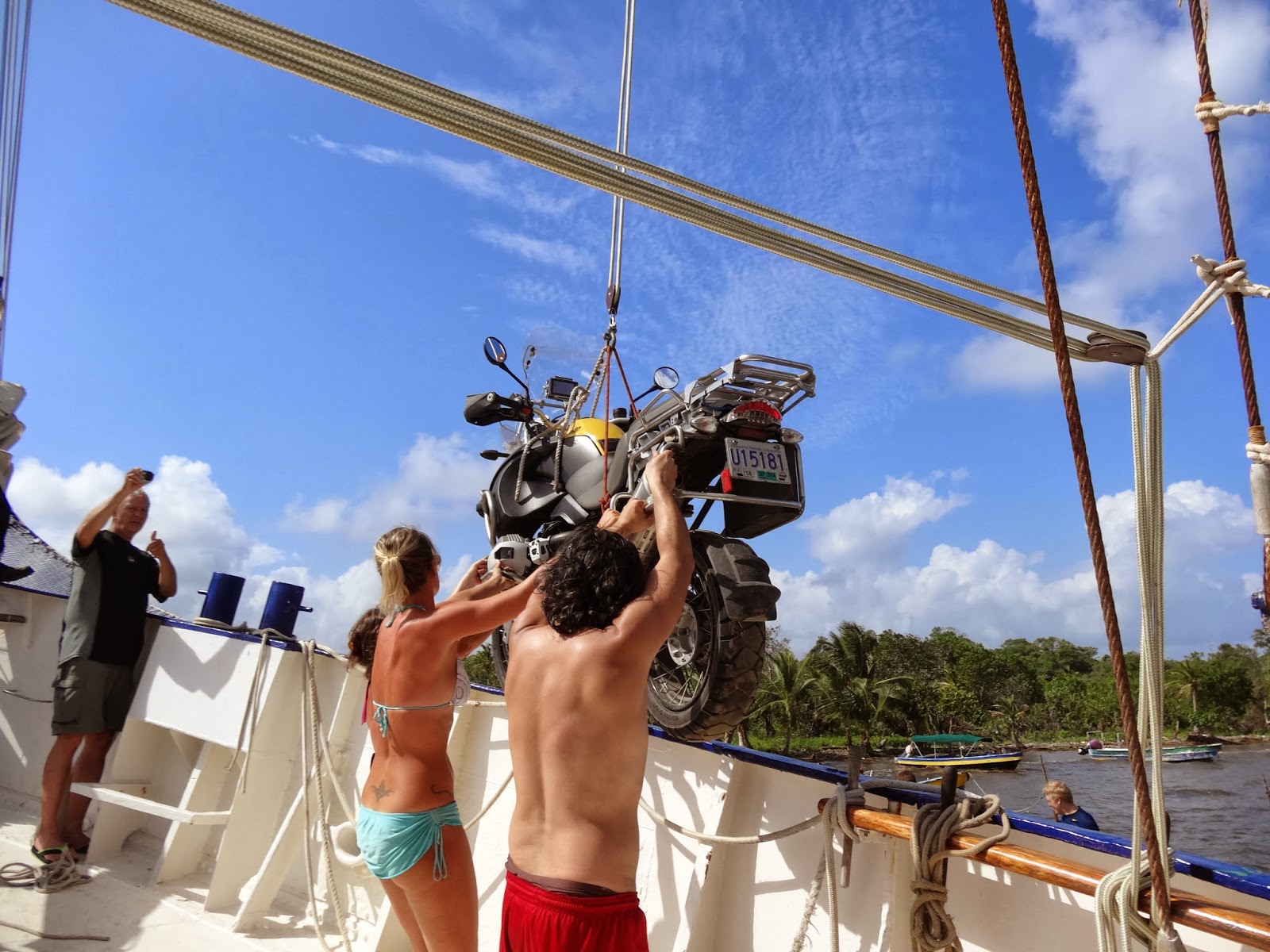 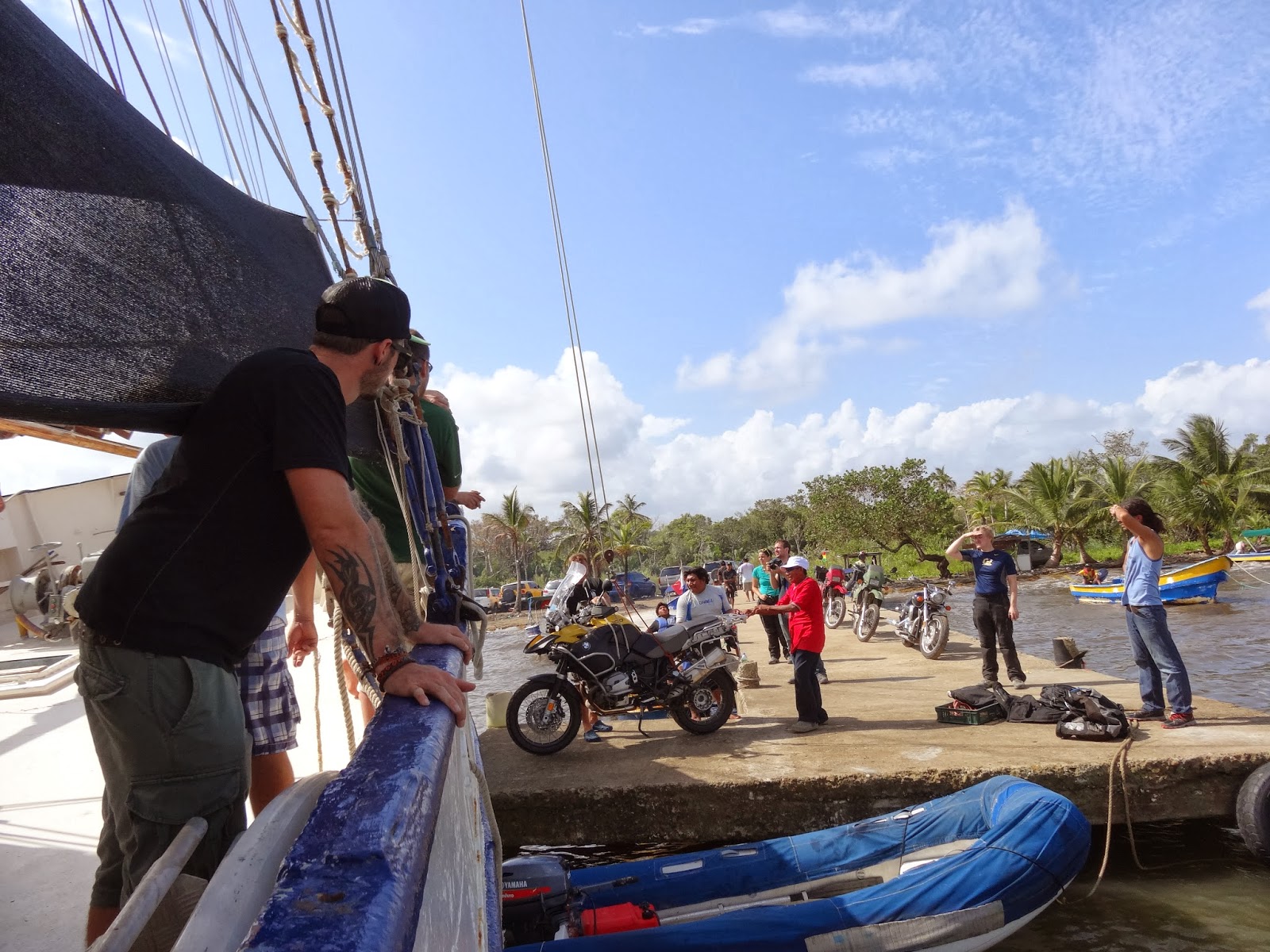 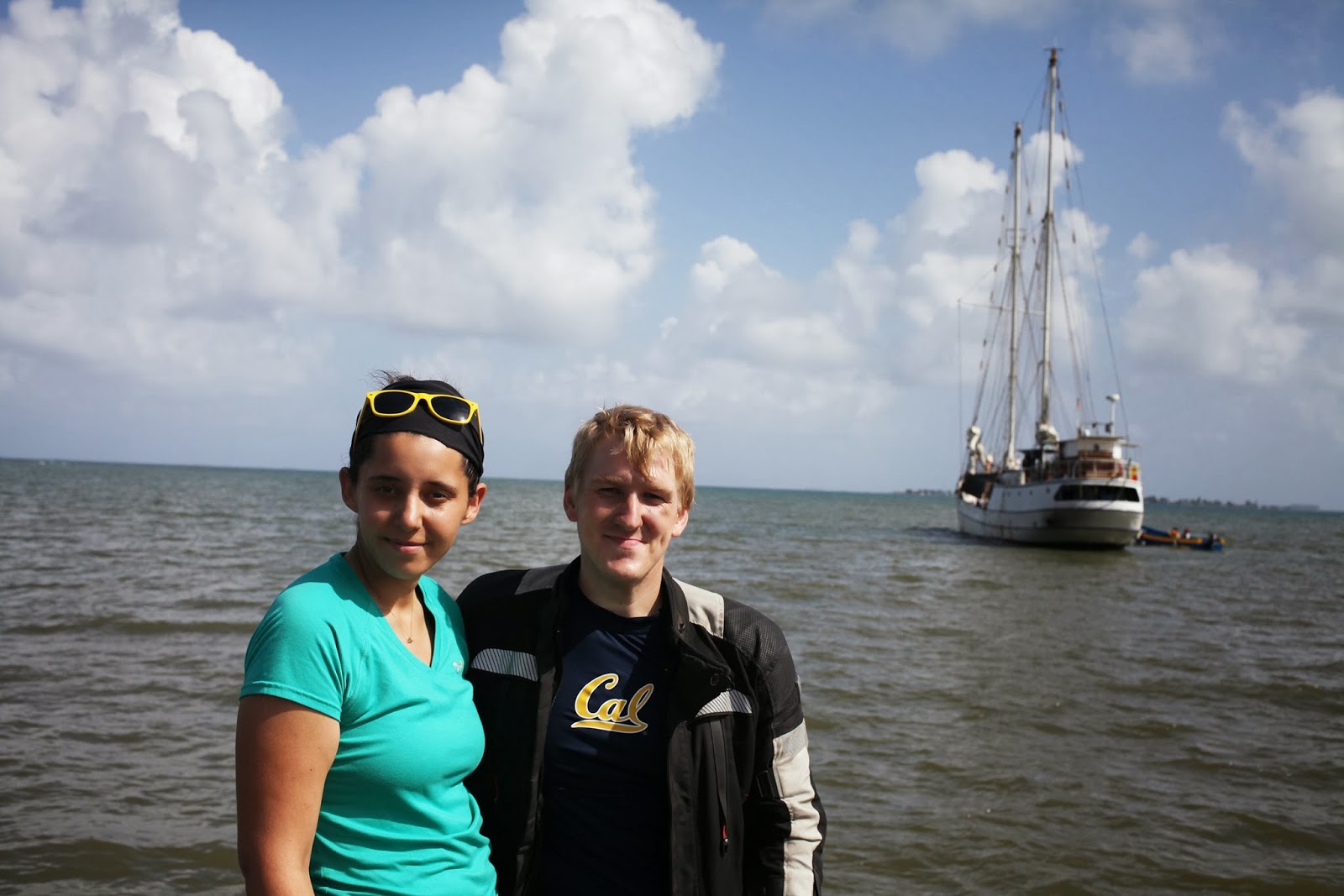 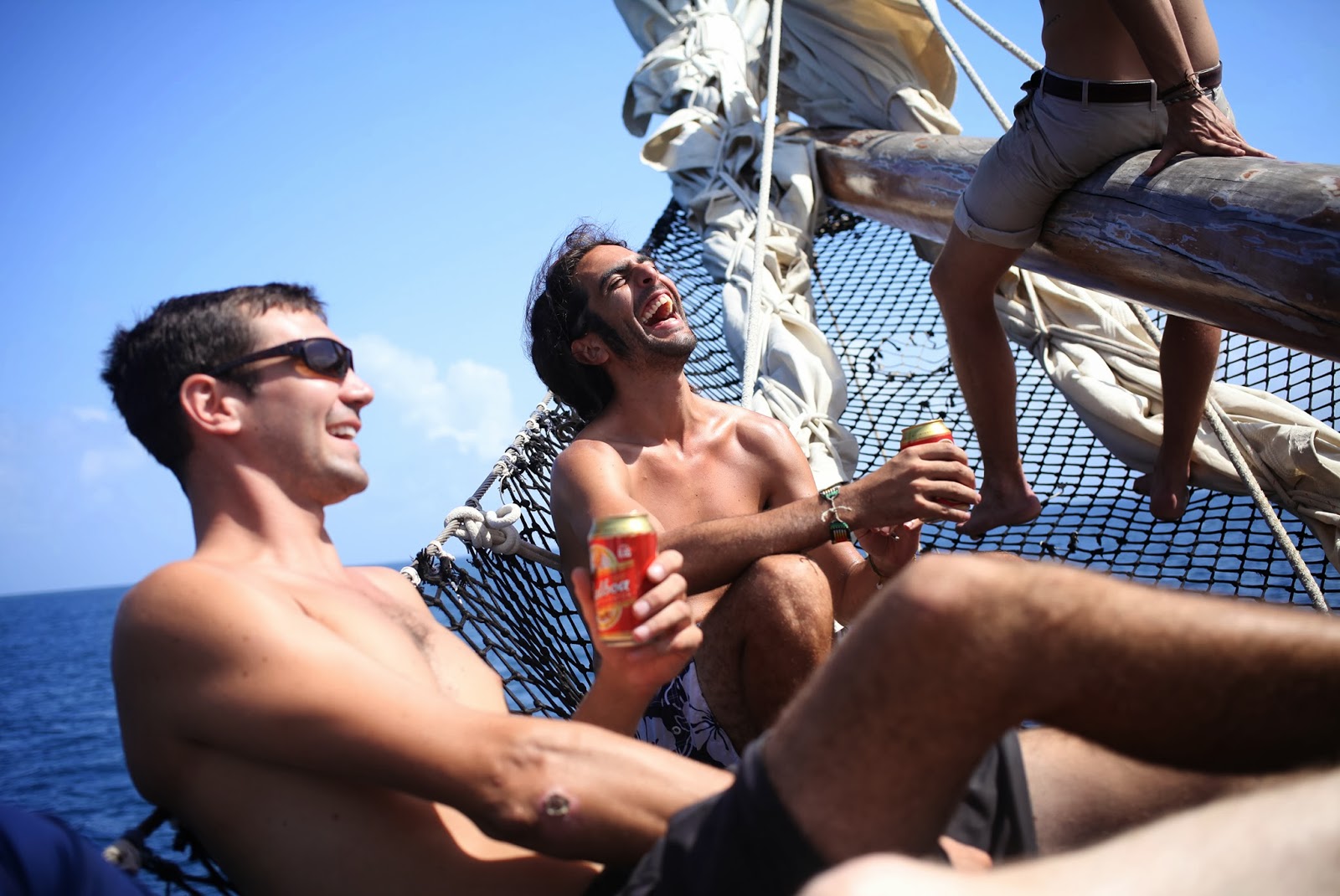 Jesse and Nicolas (aka Chile) (photo courtesy of Alex Washburn) 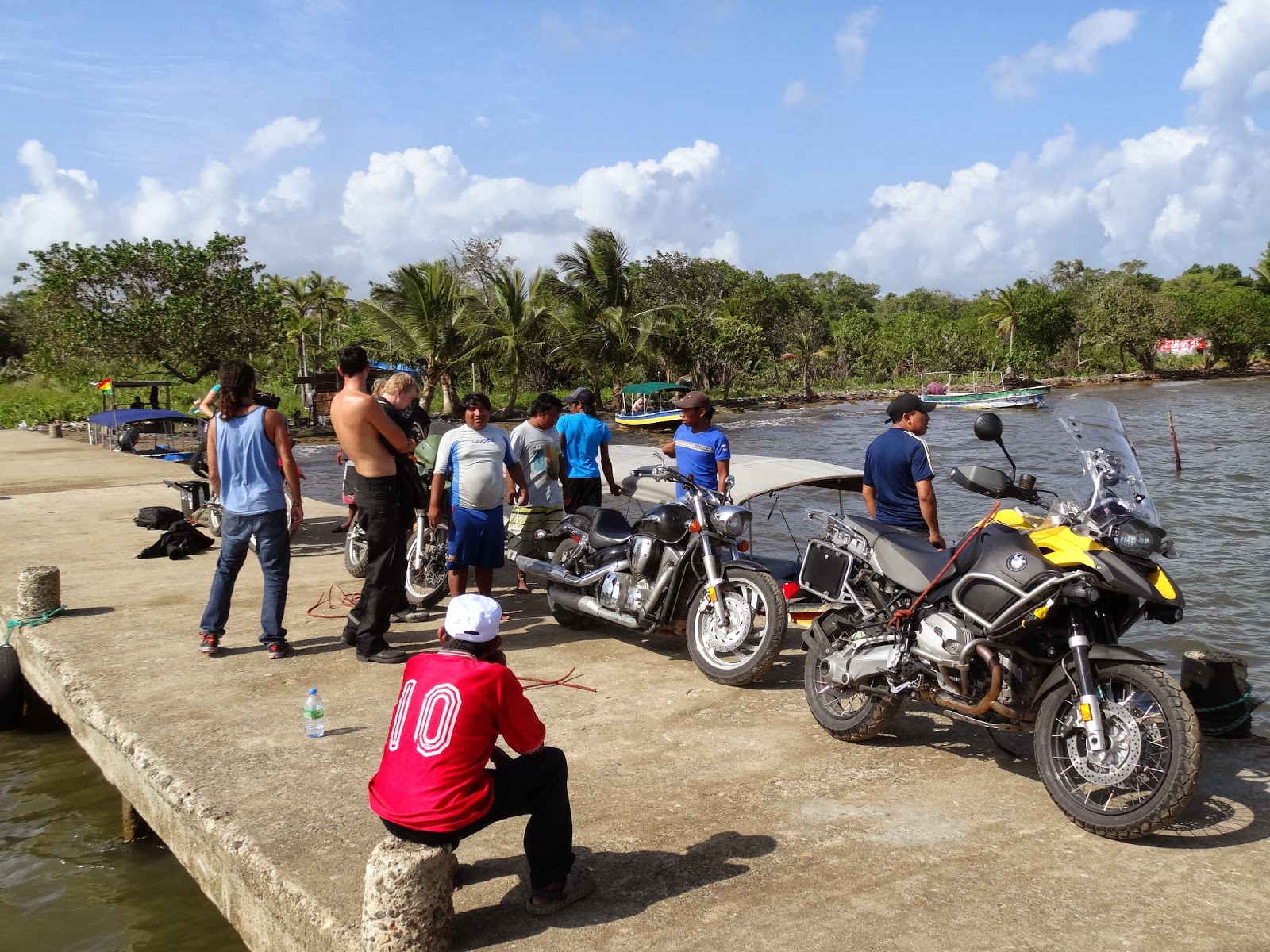 Kuna natives are employed to help load the bikes and also provide baked goods along with seafood for the voyage.
We run three hours under diesel power to get to an island in the San Blas and pull within thirty meters of the shore and set anchor for the next day and a half of relaxation. The sand is as soft as flour and the water is just the right temperature. 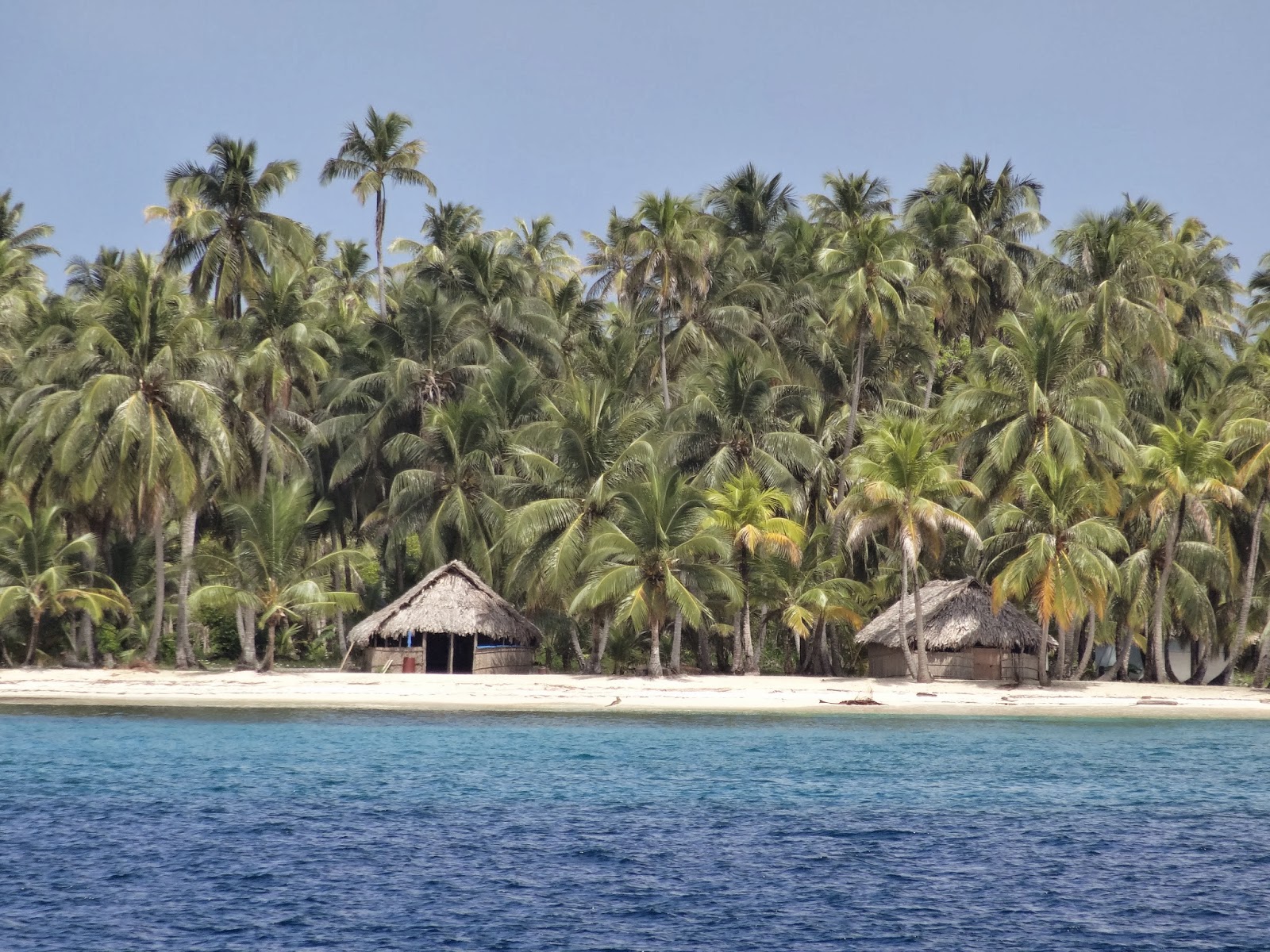 It doesn’t take long before everyone is diving off the decks or jumping into the water with the help of a rope hanging from the sail rigging. (See the video below) 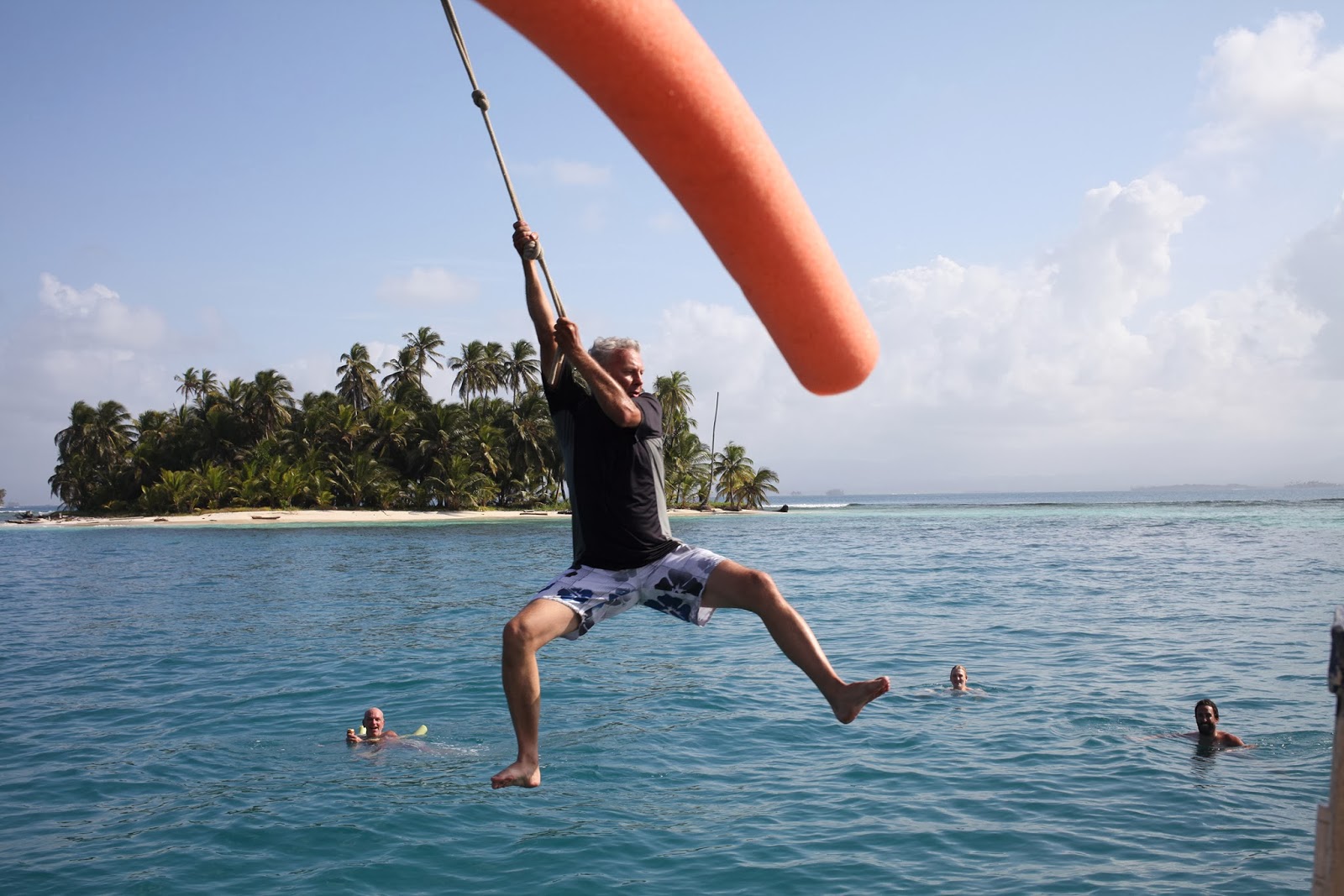 Ken taking a turn on the rope swing.(photo courtesy of Alex Washburn)
The evening is spent on the island making new friends, eating kabobs for supper and followed up with a bon fire.


Dinner on the beach in the San Blas islands. 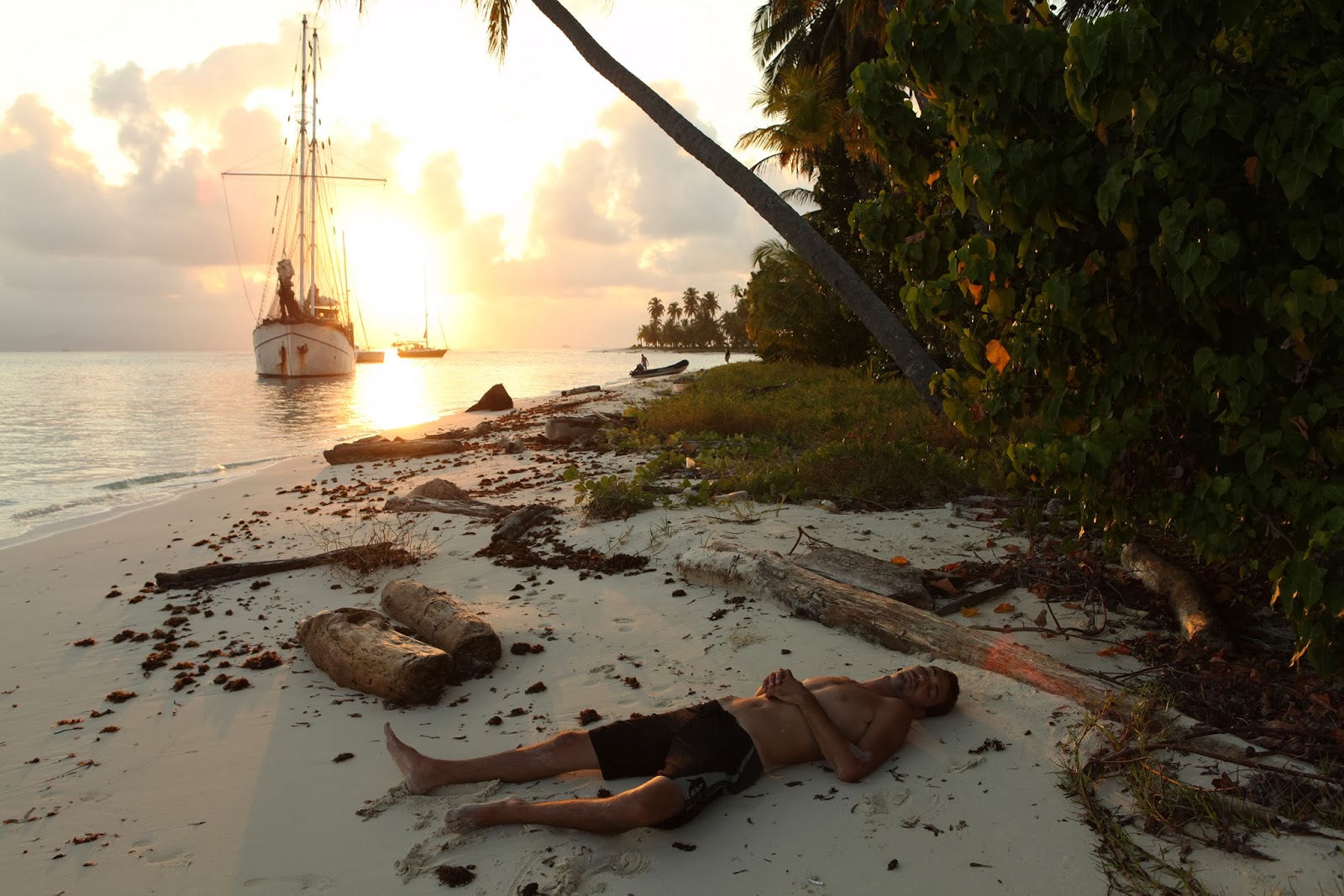 San Blas claims its first victim before sundown, Jesse did eventually make a comeback. (photo courtesy of Alex Washburn)
January 4th
Today becomes a day of non-stop entertainment, getting to know our fellow passengers and of course some beer drinking. The current in the water is a lot stronger today and I limit my water activities rather than risk being dragged out to sea. The crew comments that they are concerned about running out of beer on this trip. Diana and I are the oldest people on the boat and I won’t even attempt to keep pace with the younger crowd.
(The following video is of Jesse from Ottawa doing a rendition of a Spanish song)
Jesse performing on the Stahlratte.

View from the island.

View from the boat. 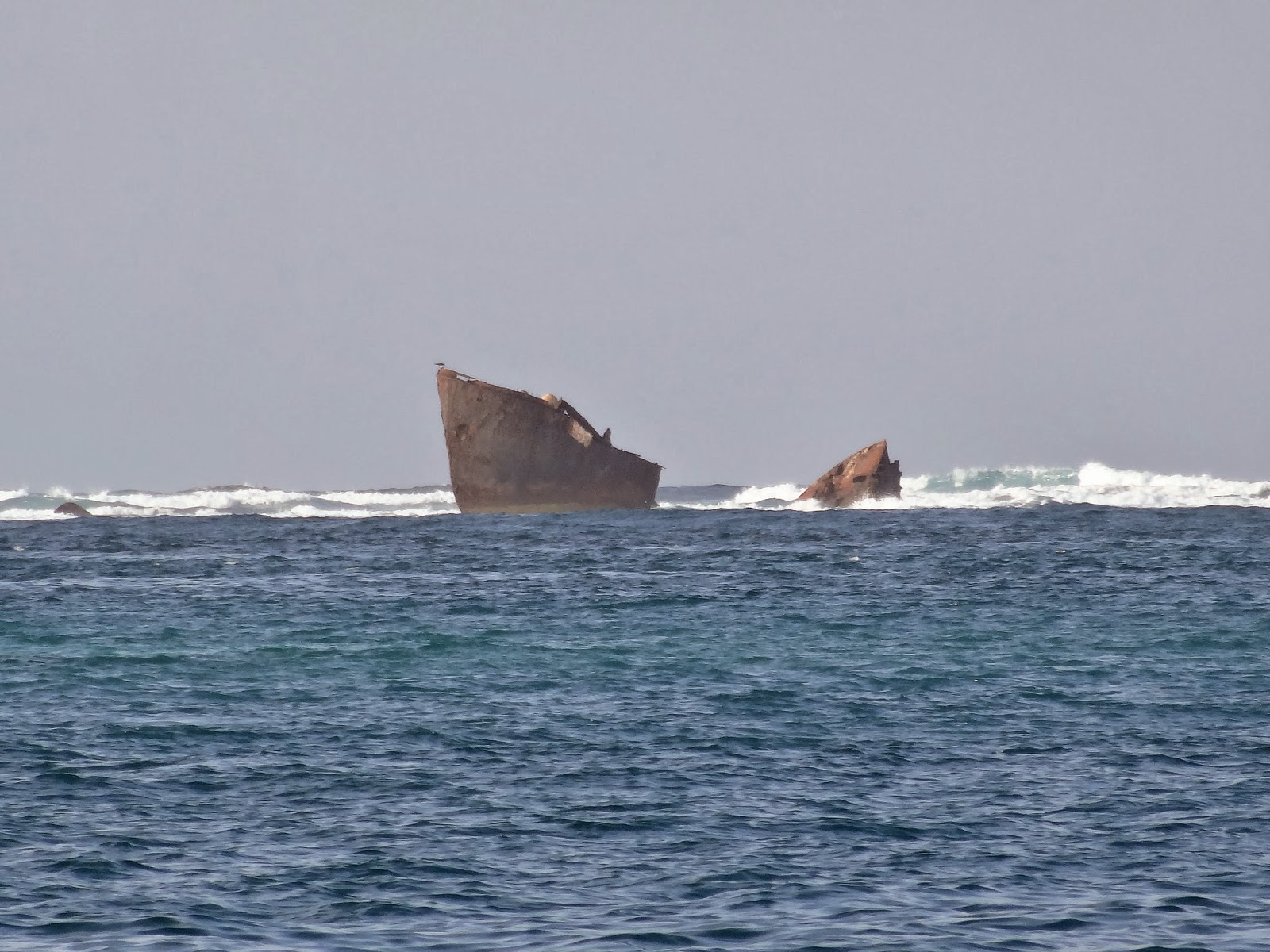 Remains of a container ship that hit the reef in the mid eighties. 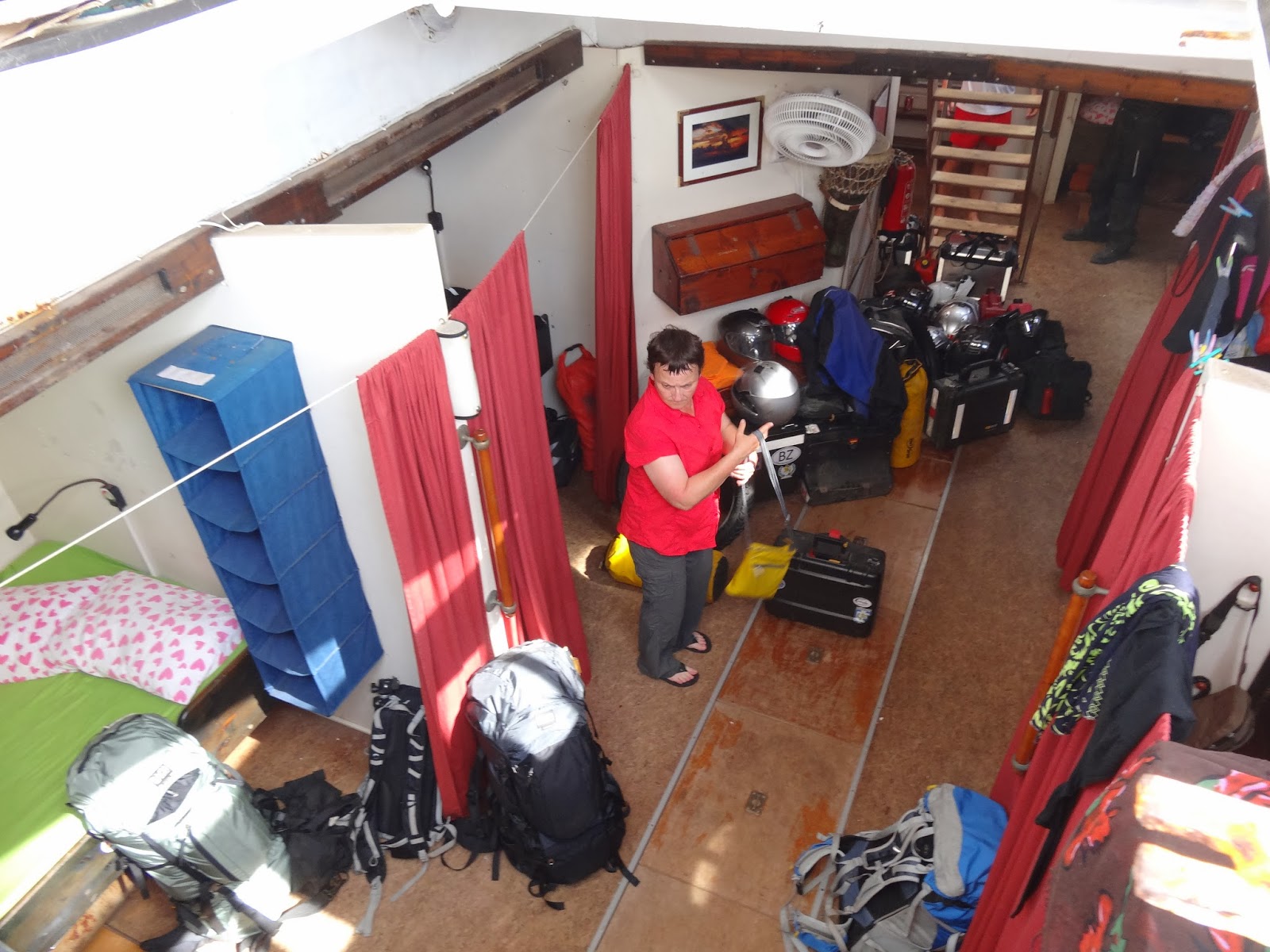 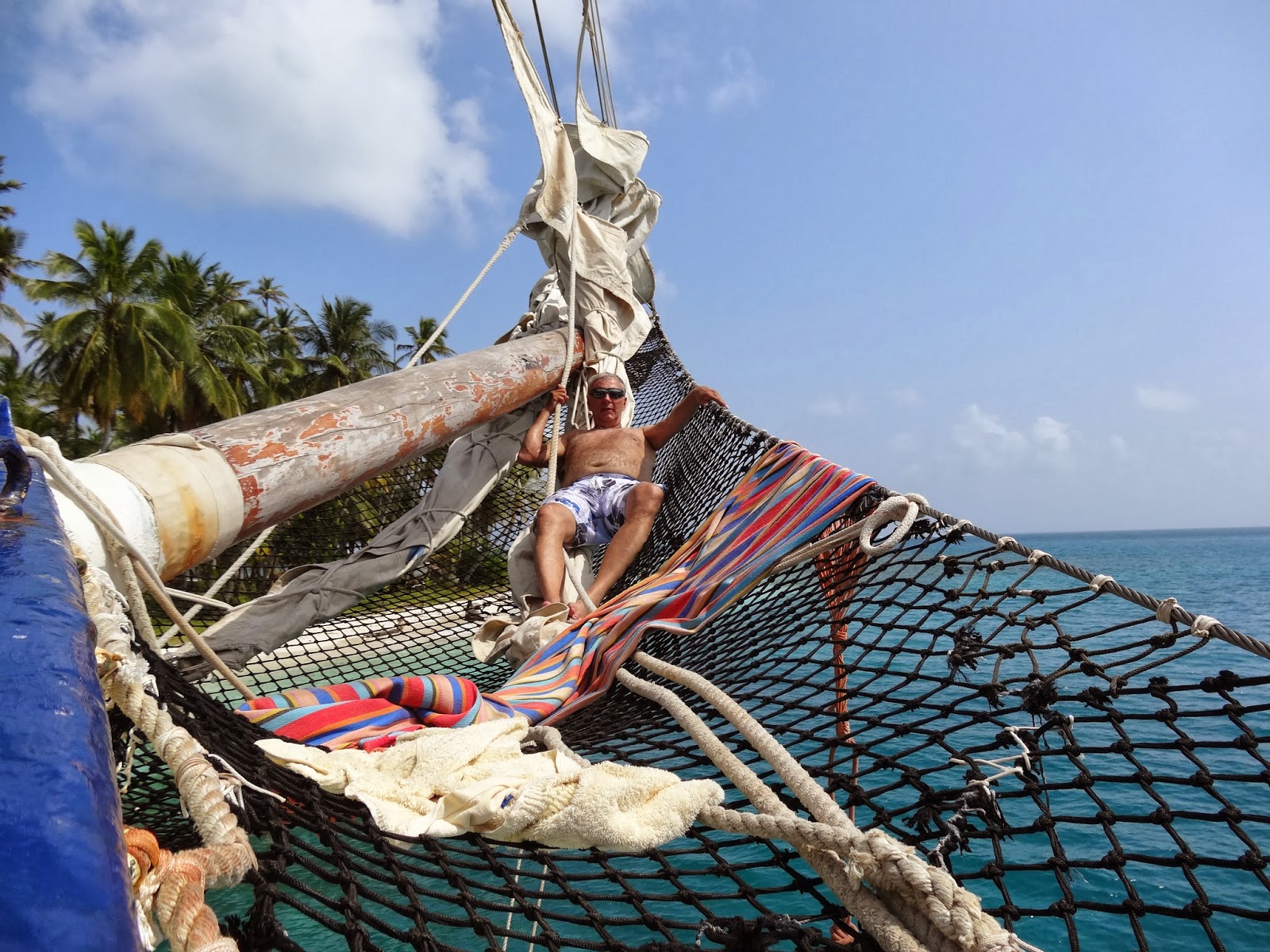 January 5th
Our day begins at 5am with the sounds of the crew preparing the ship to set sail.  The sails are prepped and both anchors lifted. It’s light enough that you can see the surf crashing on the edge of the reef and as soon as we cross the reef the ride becomes much rougher, claiming its first victim as he hangs over the railing. I’m fairly certain it’s a result of the drinking the night before. My good friend Heidi saved me from getting sea sick a number of years ago in Tofino and this time we came prepared with Gravol. Both Diana and I take two each and settle in for the marathon run to Cartegena. The swells according to an experienced sailor are 3.5 meters and somewhat larger later in the evening.
At this point I’m unsure if I should have breakfast or not but finally go for a bowl of fruit and three buns with homemade jam. Hopefully I don’t become a victim to sea sickness.
About 10:30 am I make my way below deck, stepping over Chris who is sprawled across the floor at the foot of the steps (he’s in bad shape from the previous night). I catch an hour’s sleep before pulling out the laptop to record some thoughts. Lying in our berth feels like laying down on a violent roller coaster as you get pitched in every direction. At times you can anticipate the next change in direction by the noise of the water on the hull. At times there is little noise from the hull and you know its partially out of the water, then total silence as it catches air time before dropping back into the water. It sort of feels like riding in a small airplane in stormy weather except you can’t see.
There is little other noise with the exception of our fan and the roar of the water against the hull as everything else has settled into place hours ago. There are laptops, cameras and misc. personal items on the floor after being tossed from their original storage place. We are fortunate to have spoken with some of the crew and knew what to expect and so far everything is still in place.
The rough seas are claiming many victims as there are people hanging over both sides of the boat now and we are only a few hours into a voyage that will take 27 hours. The boat has five of its six sails deployed and the engine is chugging away at its 240 RPM. (Full speed is 7.5 knots)
Although my stomach is okay I don’t want to risk eating too much and resort to eating a dozen crackers and some pretzels for supper. The boat is deathly quiet and we decide to go to bed at 9:30. A number of times throughout the night we are awaken by the changing noise of the water on the hull indicating rougher seas.
January 6, 2014
I’m awake at 6 am and eventually go have a shower which is just a garden hose on the side of the main deck. (The ladies have a shower but Diana says it’s so small that you can’t even get dressed in it) The sails are dropped and we pull into Cartagena under diesel power about 9 am. It’s some kind of national holiday in Columbia, all the government offices are closed and the captain can’t get our passports stamped. The bikes will be hoisted off the boat onto a floating dock at 7 am tomorrow which will then be towed to shore for unloading.  We then need to clear the bikes through customs which shouldn’t be a problem as the captain of the boat has told us we will use the ships broker to process us and the bikes.