For those who followed our South America blog you may remember that Diana and I met a number of people that we knew, knew my sister or were neighbors of our friends back in Canada. Well, the Yukon, NWT, Alaska trip started similarly on Friday evening. I stopped at Tim Hortons in Squamish for a bite and got to talking with Ryan who was there with his children. I had met Ryan’s father Steve about 10 years ago in Saskatoon at a business function.

Friday night we camped at Squamish and hit the road early on Saturday riding about 600 kilometers, the boy had a sore butt and couldn’t ride any further. As he puts it “we were weak as a team”. He tried to redeem himself by making Couscous salad but failed to make the grade as a chef.


Sunday morning we left Quesnel about 6:30 with good weather and by the time we reached Williams Lake the thermometer on the bike was reading 94 degrees. We rode over 1000 kilometers camping in a settlement called Iskut which is about an hour south of Dease Lake. The Cassiar Highway was in great condition and either paved or chip sealed so we made good time as there was very little traffic. 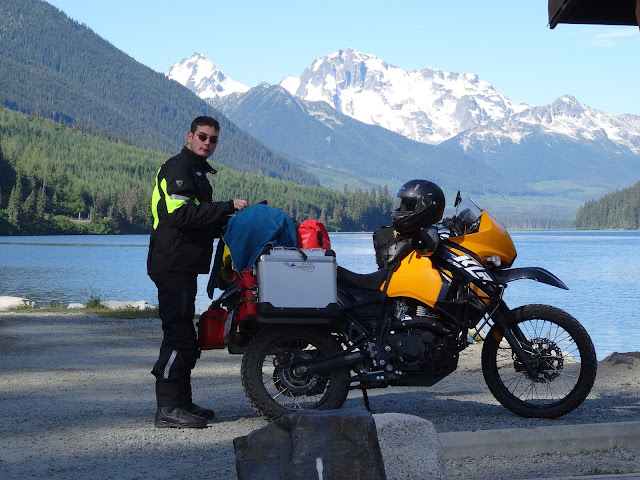 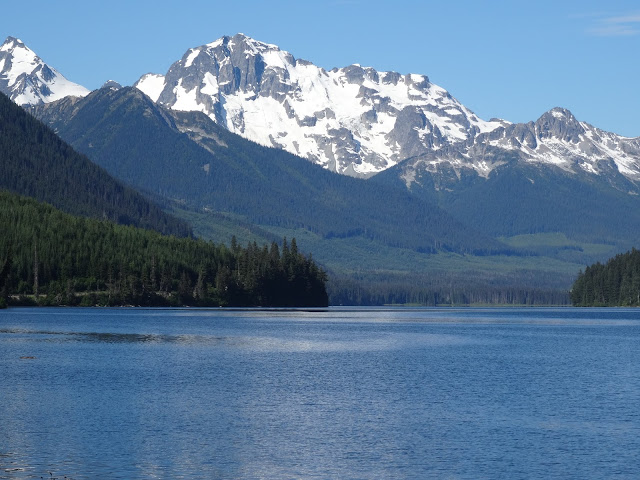 We wake up to light drizzle on Monday knocking down camp and loading the bikes before it decides to start raining. Just over an hour drive to Dease Lake for breakfast where we meet a couple from Guelph, ON who are returning from Inuvik. They said the road was a very challenging drive due to the amount of rain mixed with fresh calcium that was on the road.  Her KLR650 lost all its electrical due to the calcium penetrating the electrical sockets and preventing a good connection. They both had 2 flat tires each on the Dempster which seems to be fairly common from the people we have spoken with. We stop at the Yukon border for a quick rest and meet a couple from Leavenworth, WA who are each pulling a trailer behind their bicycle. They’ve been on the road for 4 weeks and were pedalling to Anchorage. Earlier in the week they had pulled into a campsite and while setting up their tent a bear got into their food supply. It’s been raining intermittently all day long but clears up just as we approach Teslin for planned fuel stop. While I’m filling the tank we are approached by another biker who is need of booster cables. It turns out that the father and son from just north of Mexico City have a dead battery in one of the Suzuki V Stroms. I have an opportunity to test my Spanish speaking skills with the father as we are connecting the booster cables and putting his bike back together. After a few photos and an exchange of contact information we are on the road.  We arrived into Whitehorse about 7pm and find a campground downtown and call it a day. 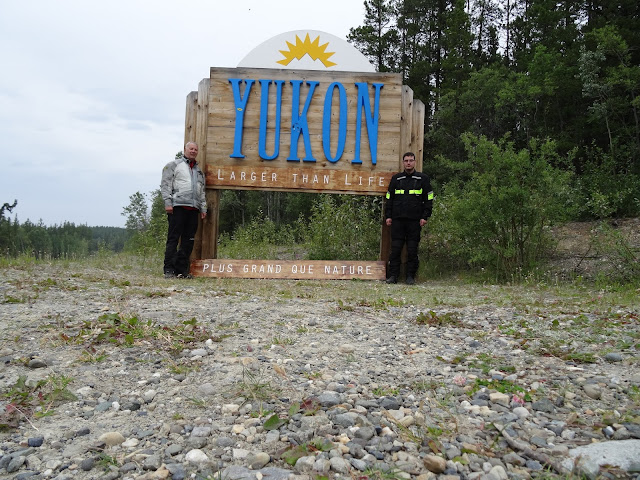 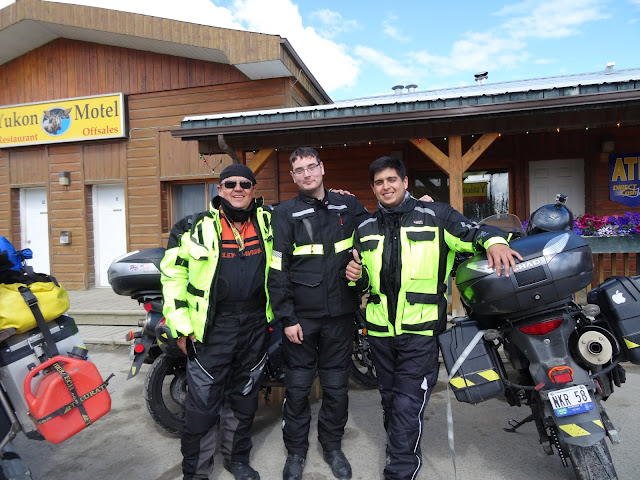 Tuesday morning we meet a fellow biker named Julian and have breakfast together. Julian is originally from Columbia and we have a great conversation about our trip to South America as he had been to many of the same places we had visited. We plan to meet later in the week and hopefully ride together from Dawson to Inuvik. Later we track down friends of ours, Butch and Judy from Kenora, ON and relocate to a different campground and settle in to catch up on what’s happening with them. While downtown today we meet a young lady from Bend, OR who is riding a KLR650 with a sidecar. Her golden lab rides in the sidecar wearing goggles to protect his eyes. 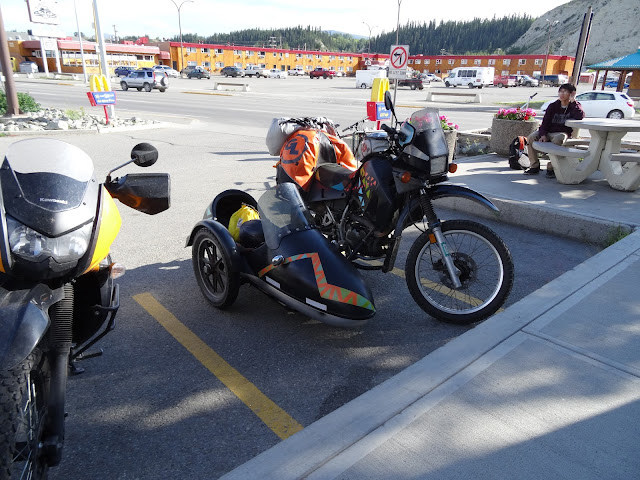 Happy Canada Day! Before going downtown to take in the Canada Day activities I do a mechanical check on my bike and then notice Kirk’s rear tire tread is not looking good. He could probably make it to Inuvik but there is no way it will get him back to Dawson. Mark (Diana and I rode Argentina and Chile with him last year) and George arrived in Whitehorse today after the highway was closed for a day due to a fatal roll over involving a 5th wheel trailer. We have dinner together, share some laughs and look forward to meeting them between Dawson and Inuvik. The weather on the Dempster is still not good and motorcycle travel not recommended.
Thursday, July 2, 2015 we get to the Honda dealer just after they open and Kirk purchases two new tires, gets them installed and balanced in less than an hour. If you need to replace tires in Whitehorse these are the guys to go to! On the way to Dawson we stop in Carmacks to bid farewell to Judy and Butch.  While refueling the bikes in Pelly Crossing this Honda Gold Wing exits the highway into the gas station and almost crashes in the loose gravel then as he's approaching the fuel pumps way to fast he locks up the front brake and crashes into the garbage can. I help his wife onto her feet and with the help of another guy we get the bike upright. The dude and his wife are in their late 70's and by the looks of the bike it wasn't their first close look at the asphalt.  The next three hours to Dawson was mostly rain and we agree a hotel room is in order for tonight.

Friday, July 3. 2015 it's quit raining but an email from Tracey and Peter advises us not to come out to their gold claim as the road is impassable on a motorcycle due to the three days of heavy rain in the area. We change plans again and will take the Top of the World highway to Chicken, Alaska and hopefully go to the gold claim on the return from Inuvik. 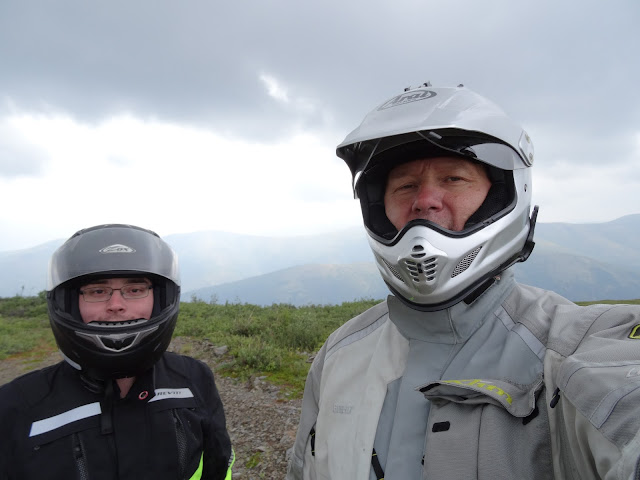 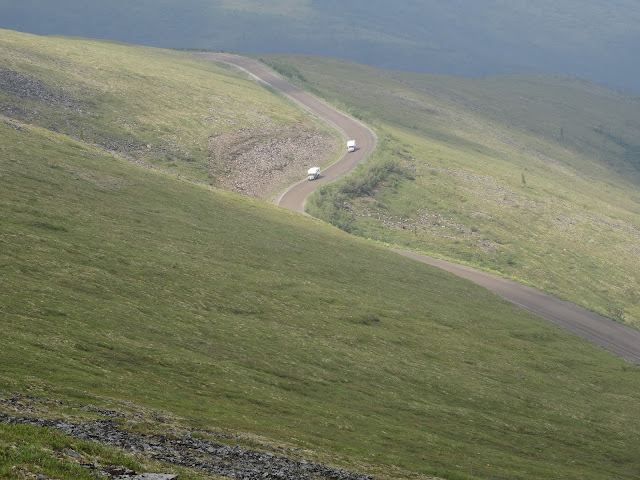 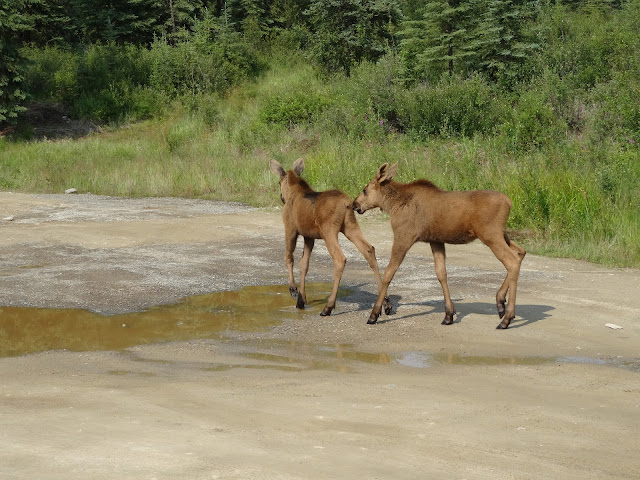