Diana and I are in Tucson, spent the day preparing to enter Mexico tomorrow morning. Thanks everyone for the words of encouragement!

We spent our first week making all kinds of changes, everything from how to load our baggage more efficiently to how not to fall off the bike. Diana fell off the foot peg while climbing onto the bike one day resulting in an eight inch bruise on the back of her leg. Our best dismount happened at the main entrance to a casino in Corning, CA. My leg got caught as I was climbing off the bike and pulled the bike off the side stand with Diana still sitting on it. I managed to keep the bike from hitting the ground but with Diana still on it we were trapped. Fortunately, four guys saw our graceful entry and hoisted the bike and us back to a vertical stance. Later that evening we were able to laugh it off with the front desk clerk who saw it all happen and we had to come clean with him that the casino would need to replace the bush that Diana wiped out. Our new rule is to take a break from driving every 2 hours to prevent these situations. 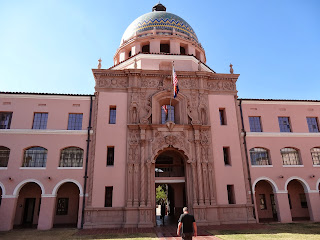 Built in 1929, the Spanish Colonial Revival courthouse is one of Tucson’s most beloved landmarks. Its mosaic dome is one of the Old Pueblo’s most recognizable structures. A portion of the east wall of the original Presidio of Tucson runs through the courtyard and is marked with a strip of granite. The building is still in use with courts and county offices. 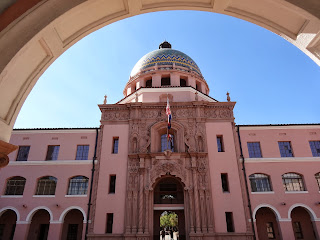 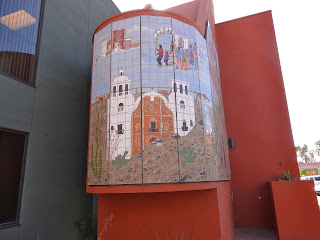 This commercial building had a ceramic mural wrapping around one end of it. 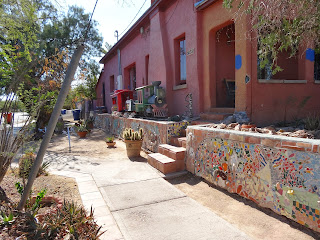 Even this building in the historic district had a retaining wall with a ceramic mural.
Posted by Ken at 9:16 PM