We started our morning off with a breakfast that reminded us of breakfast at home, scrambled eggs, toast, fruit and coffee. Experiencing new food is great but sometimes the familiar is needed particularly since our stomachs are still not 100 per cent. The hotel that we stayed at (Hotel El Reformador) is run by a family and we would recommend it to anyone travelling through. The rooms are spotless, very nice and the hosts are great at helping in whatever way that they can, plus totally secure in garage parking for the motorcycles which always lets us sleep better knowing that our transportation is safe for another days ride.

﻿
We walked around San Marcos for a few photo ops before heading out. Taylor is still riding with us and between his GPS and ours and his map we sort of figure that we can find our way out and onto the highway. Neither one of our GPS is really accurate in Guatemala, so we often ask the locals how to find something and they are always extremely helpful. After riding down a cobbled road we eventually came upon the highway with Taylor riding in front. There was a large shoulder and rutted entrance which he had no problem making and was on his way down the highway. We weren’t quite that lucky with our heavier bike and riding two up, Ken tried to save the bike from hitting the pavement which was a mistake, because he did end up wrenching his back before falling. I hit the dirt, but other than getting dirty was fine. The bike sustained minor injuries: scratched pannier, engine guard and the throttle lock is inoperable. Taylor was already around the corner and didn’t realize that we weren’t behind him for a while. A couple on a scooter stopped to see that we were alright, helped us lift the bike up and we were on our way again to see Taylor on his way back looking for us.
﻿
We rode until we came upon the town of Quezaltenango and stopped for a break to check out their Saturday market in the central plaza. I loved the choice of items that they have exhibited and bought some bread (it made a delicious snack for lunch and reminded Ken of peppernuts; likely only his relatives will have a clue what that is) along with oranges and apples. We enjoyed talking to the people who are always curious about who we are and where we are heading. Ken sat and talked with a young man and his one year old son who was dressed for a Saturday outing to the central market. He also has a ten year old daughter and had moved to Boston, USA to work as a mason for an eight year period leaving his family behind. Quite a number of people speak English or a least some English. Ken has not improved his Spanish skills, but with his goofy gringo charades people usually figure out what he wants.
﻿ 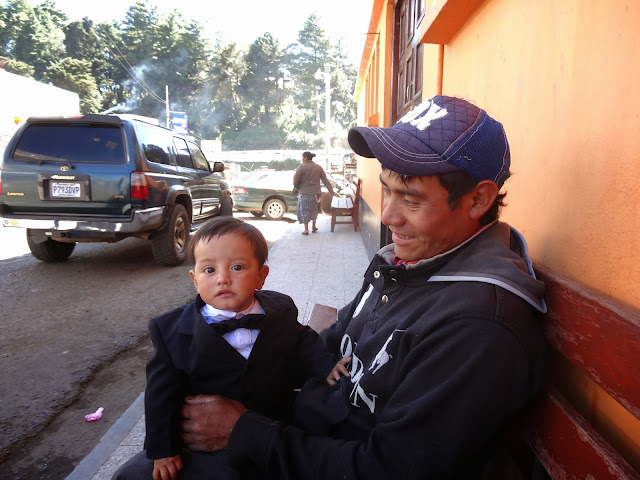 We are totally blown away by the spectacular scenery in Guatemala and the twisting, sharp curves and steepness (we were at 3022 meters at one point today) make for awesome riding: just that little adrenalin rush that we require when we ride. We hit a wet patch on a sharp curve and for a half a second I thought that we were going down for the second time in the day, but Ken pulled it out that time. 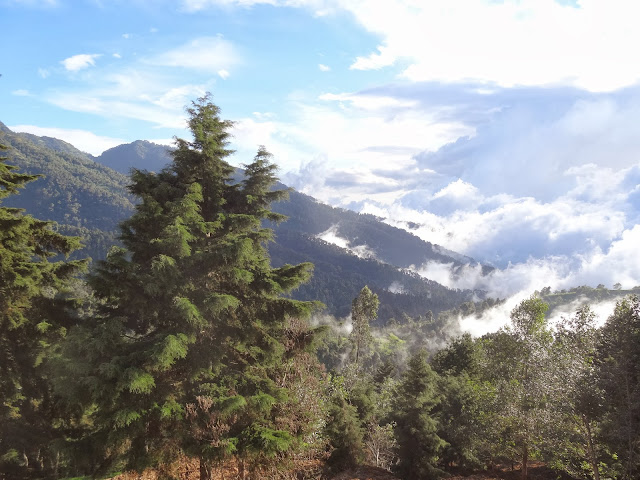 The people of Guatemala seem very industrious and hard working. The country side is full of acres and acres of corn, potatoes and a wide variety of other crops. 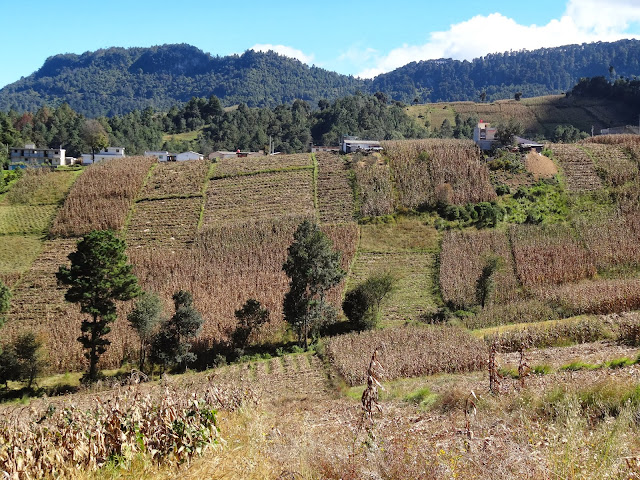 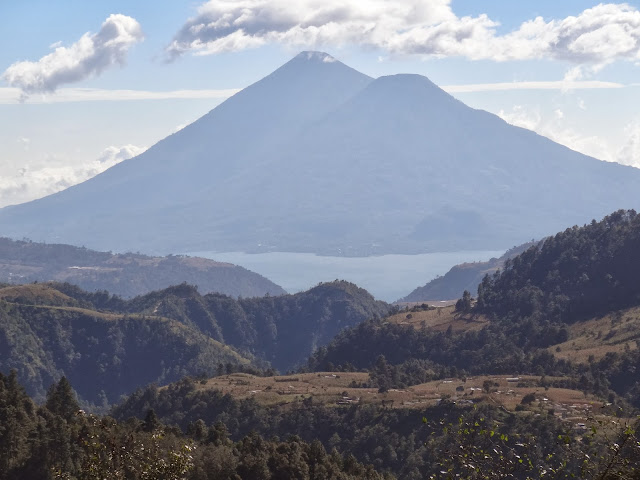 Volcano
We eventually rolled into Antigua to find that due to several weddings happening this weekend most hotels were totally booked. After many enquiries we did find a room and Taylor a hostel, but we were feeling a little stressed about it for a while as none of us felt like heading out at dusk to look for accommodations in another town. We are hoping to enjoy a good night’s sleep.

Posted by ChasingDreamsOn2Wheels at 3:32 PM