Ahhhh! A good night of rest makes us feel renewed and eager to see more of our surroundings in the historic old town of Antigua. Kens back isn’t as sore as he had thought it would be although he is walking a little lopsided; hopefully he will be back to normal in a day or two.

We would like to start this with an apology to everyone for our lack of posts lately. We do not have internet now and must always go to somewhere with Wi-Fi and we have been trying to access our blog for almost a week and have not been able to, plus a couple of days it would be just too late to even start thinking of blogs. Hopefully we are able to rectify the situation shortly.


Yesterday we moved into the accommodations that we will be living at for the next two weeks while working on the Constru Casa project. The host family that we are with are Elvira and Enrique and they have us staying in an apartment/dorm type of building across and down the street from them. We have our meals with them. They are very nice and helpful with Spanish language skills and letting us know of local events, traditions, and anything else that we need help with.

Today was our first day on the project with Constru Casa and our day started with the coordinator Emily coming to meet us at the home of Elvira and Enrique. She then went with us on the van to the job site which is about 10 kilometers out of Antiqua in a small town called Santa Maria de Jesus. The bus that we were on was actually just a van and on the return trip to Antiqua there were 28 of us in that small space. Let’s just say that you had better not be claustrophobic or have issues with people being in your personal space when you travel on one of those van/ buses. We met two really sweet little old ladies who were very curious about us and thought that it was very amusing when Ken almost rolled out the door as the vans side door is usually open and the driver swerved to miss something on the road. The other volunteer working with us and also staying in the same place is a Canadian named Warren who is from Okotoks, Alberta, Canada. It is a small world.

What happens to yellow school buses retired from commission in the United States? They start a new colorful life as Chicken Buses in Guatemala.


When American school buses reach the age of ten years or 150,000 miles, they are sold at auction. Many of these buses are bought and driven down through Mexico to Guatemala and other Central American countries where they are prepared for their second lives. Instead of carting children to school, the buses spend their second life transporting people often filled to the brim with goods and driving at high speeds over mountain passes. The word "chicken" refers to the fact that rural Guatemalans occasionally transport live animals such as chicken - a practice that visitors from other countries often find remarkable. The word might also refer to the tight manner in which passengers are crammed into these retired U.S. school buses. Either way, the experience is something travellers never forget.
Each bus has one or two young men called ayudante or helper. The ayudante is responsible for passengers and luggage, collecting money, and organizing the suitcases, livestock, or produce, etc. onto the roof of the bus–often while in motion. Loudly announcing destinations the bus is reaching is also a responsibility.
Originally we were supposed to be building a house for a family, but that was changed a couple of weeks ago. We are now helping to build a school instead. We are very enthused about helping to build a school, but a little disappointed that we won’t be able to see the finished product in our two weeks of helping.
The work is very hard, we are working with cement, pouring cement for the courtyard and everything is done manually, everything! There isn’t a cement mixer; the whole process is done by hand. Basically the ingredients get poured onto the ground: sand and cement first get mixed together, than the gravel is added and a hole made in the middle of the pile and water added and allowed to sit for about five minutes then the whole thing is turned again and again until it is the right consistency with water added as needed. After mixing a couple of batches in that way your muscles kind of turn to mush and start to ache; muscles that you weren’t even aware that you had. 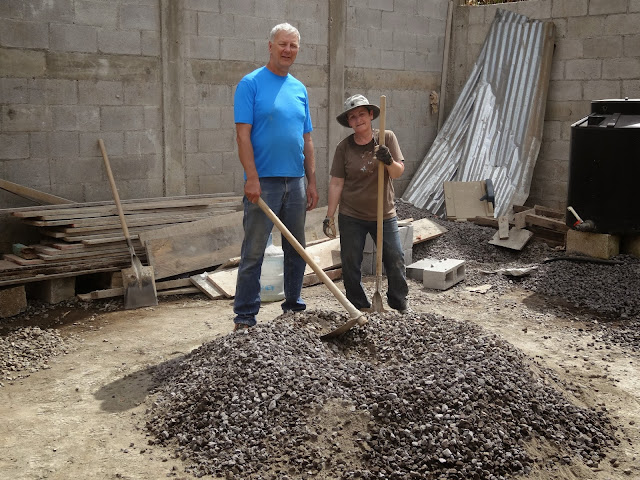 ﻿
The crew that we work with are all Spanish speaking without any English language skills at all, so with my limited Spanish and Warren and Ken constantly asking me what someone wants us to do it can be quite comical, but they are all really nice guys and good with demonstrative charades, so somehow it all works.
We felt at the end of the day that we had accomplished something and enjoyed the ride home guessing how many people could possibly get stuffed onto the bus.