We had the day off today and decided to take  a coffee tour with "As Green As It Gets" http://www.asgreenasitgets.org/
a coffee cooperative that works with local farmers to ensure all profits are made by the farmer and not a corporation. Rather than take a chicken bus to San Miguel Escobar we opted for a ride on a tuk tuk, a three wheeled taxi powered by a motorcycle. Warren and I laughed until we had tears in our eyes as the driver was weaving in and out of traffic and barely avoiding numerous collisions during the 15 minute ride. 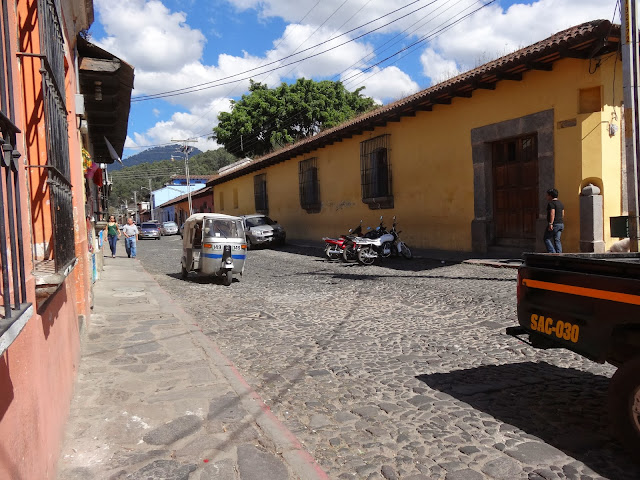 Our tour started in the village with Lesbia, her daughter Mildred and Joe (an interpreter). We walked about 45 minutes up the mountain stopping occasionally to look at the different crops growing amongst the coffee plants and trying a variety of fruits including loquats, limes, and lemons. The harvest season is just beginning and we picked about a pound of ripe fruit while learning about the growing and harvesting process. Returning to the village we went to Lesbia and Armando's home where we learned how they process the bean and enjoyed some organically grown coffee. 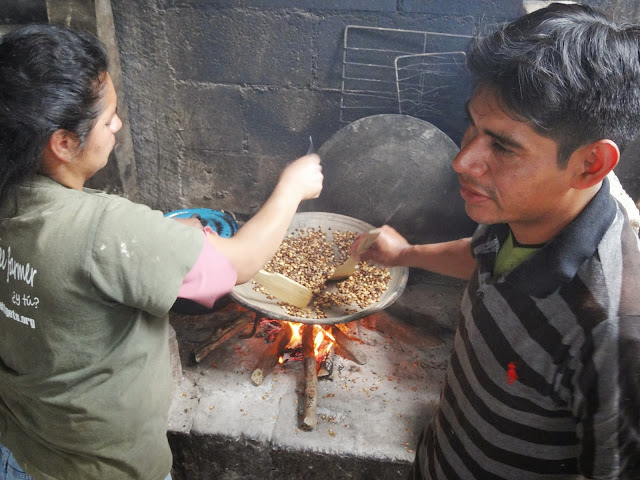 Lesbia and Armando roasting coffee beans over an open fire. 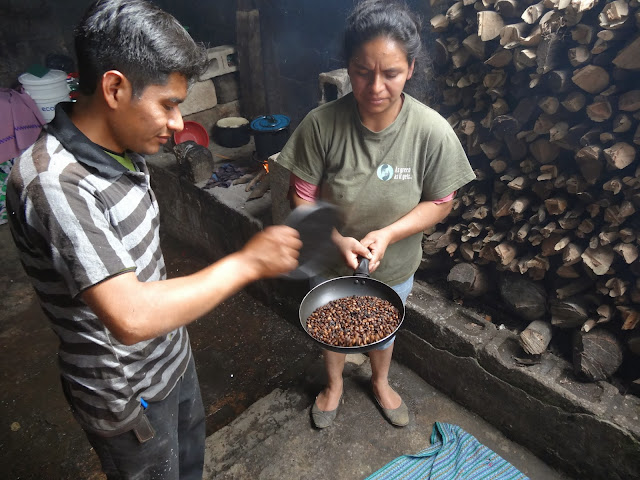 Fanning the husks from the roasted beans. 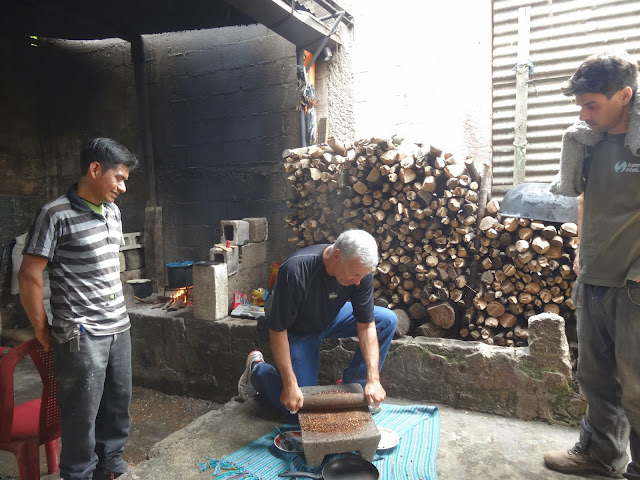 Ken grinding the freshly roasted coffee beans, at his speed we will be waiting for a while. 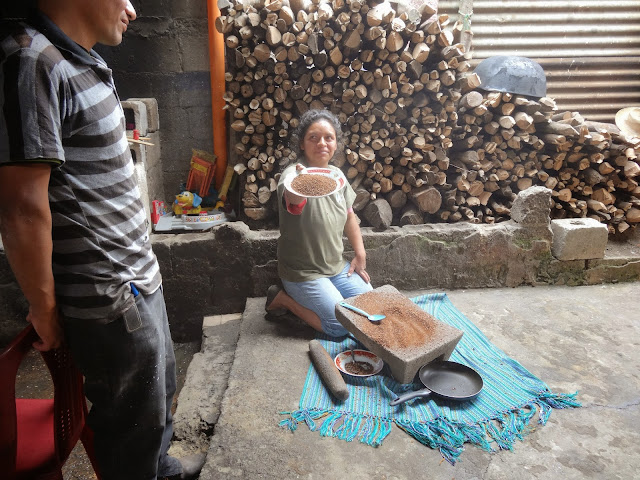 Lesbia finished the grinding in a matter of minutes. 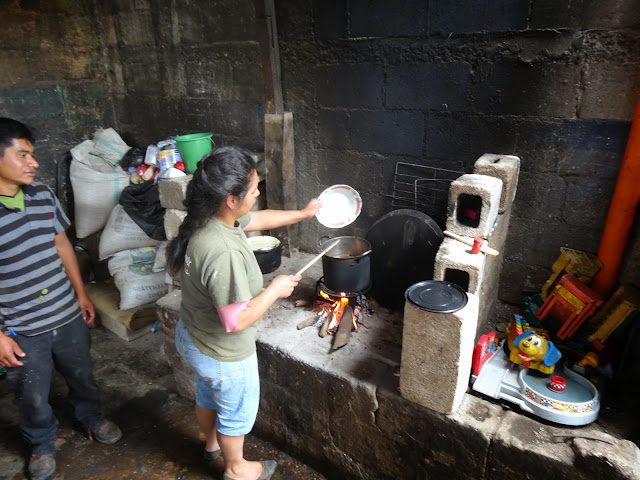 Brewing the coffee the old fashion way, directly into the boiling water. 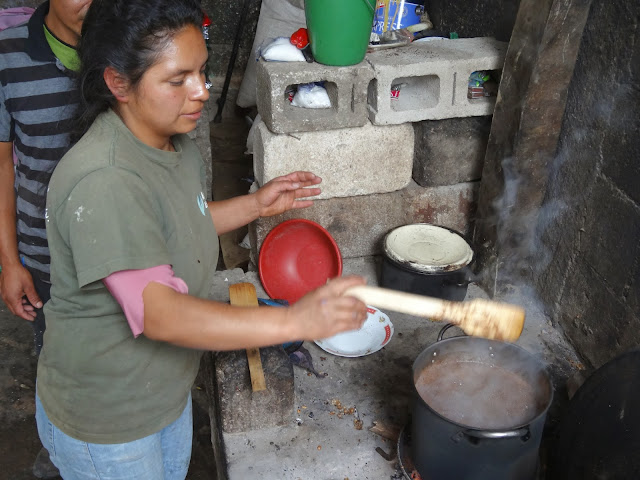 In less than 5 minutes coffee was served.
This couple is amazing, their day starts at 3 am when they kill and process chickens for Armando to deliver to the local markets by 6 am. Once Lesbia gets their 6 children off to school she also sells chickens, leads tours and works the coffee plantation.
It takes eight hours to sort 25 pounds of beans to ensure the beans they export to Canada and the USA are of uniform size, are not chipped or broken and will roast evenly. A good bean picker can only pick about 100 pounds per day. The whole process is very labour intensive!
While on the tour we saw Volcan del Fuego send ash and smoke into the sky twice within 3 hours. Lesbia told us the other side of the volcano flows lava and 33,000 people were evacuated from the surrounding area in 2012. 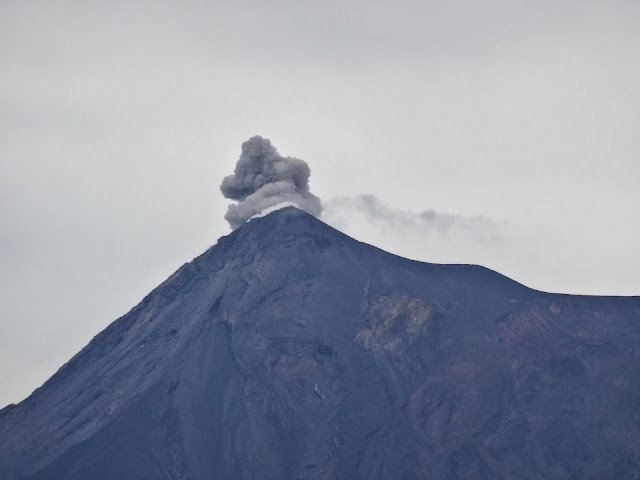