Today was our last day on the school project which is scheduled to open in early January and construction should be completed next Friday. It's been a tough two weeks doing manual labour at our age. Diana's not sure how many yards of sand she sifted in a hand held sifting box but her back is telling her it was plenty. For most of this week I was on the stucco crew as all the local guys are under 5.5 feet tall and they thought it was great that I could reach the top of the wall without a scaffold. During the first 3 days of the project we mixed concrete by hand, hauled it in 20 liter pails and leveled it with a metal tube. The pad itself was 10 x 15 meters. 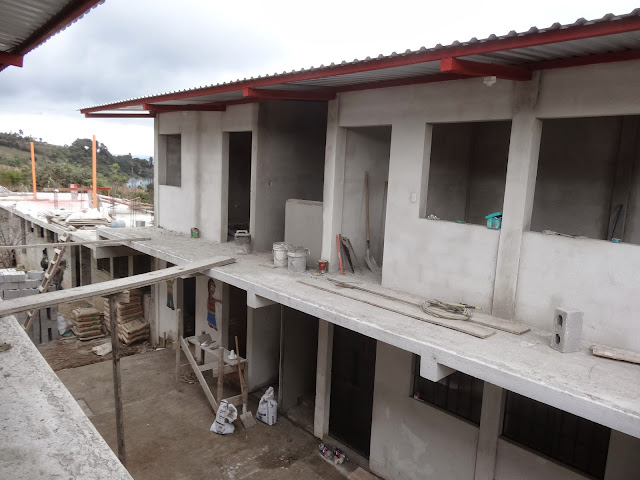 The unfinished area at the left has room for an additional 4 classrooms. 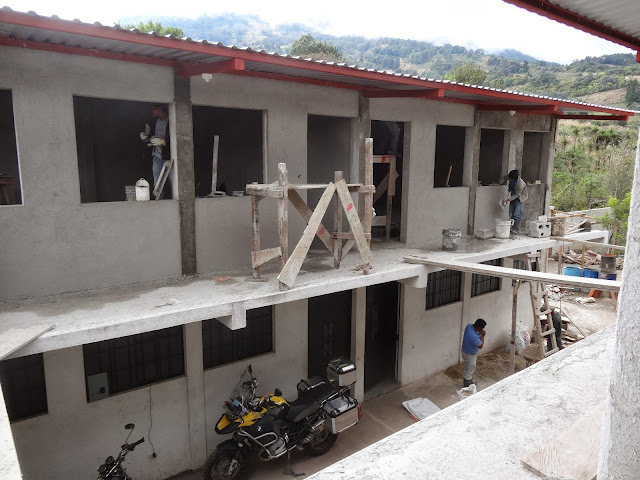 School consists of 8 classrooms and 2 washrooms which will have running water. 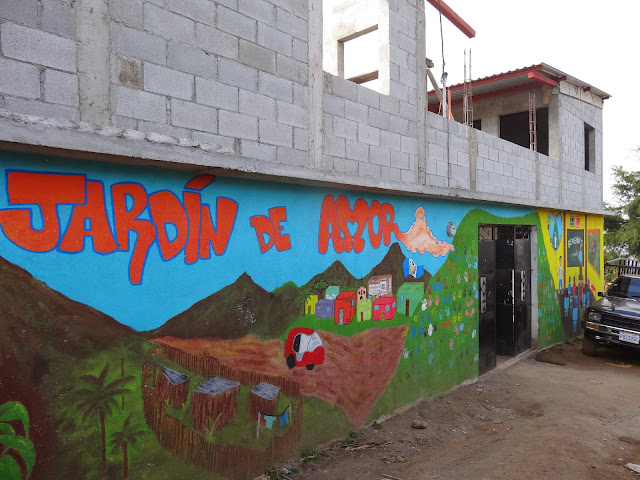 Mural on the front wall of the school.

This afternoon a couple of Constru Casa people came to the jobsite with banana bread and orange juice to celebrate the 2 weeks of volunteering we did with the work crew. We took the opportunity to give the guys souvenirs from Canada and a few of them wanted their picture taken sitting on the BMW. We suspect they had been planning this all week as they changed into clean clothes before the photos were taken. It's seldom they would even see a bike this big as most of the local bikes engines vary in size from 100 to 180 cc. 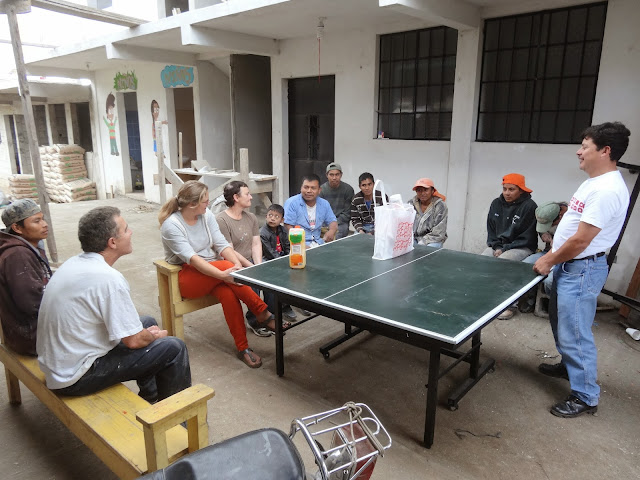 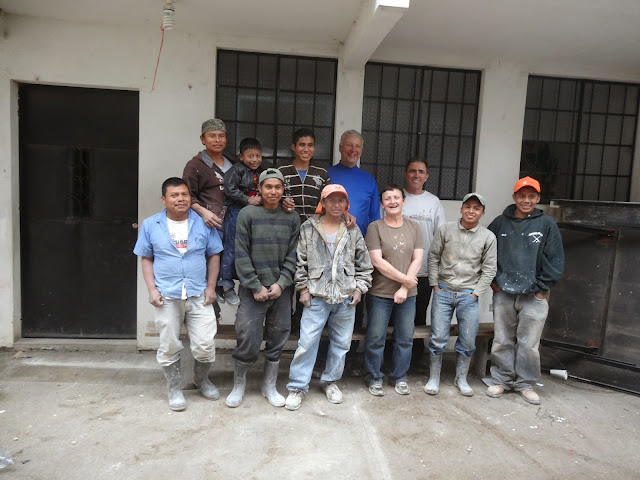 Although the guys in the back row look to be the same height as me they are all about Diana's height and were standing on a bench to be as tall as the gringo. 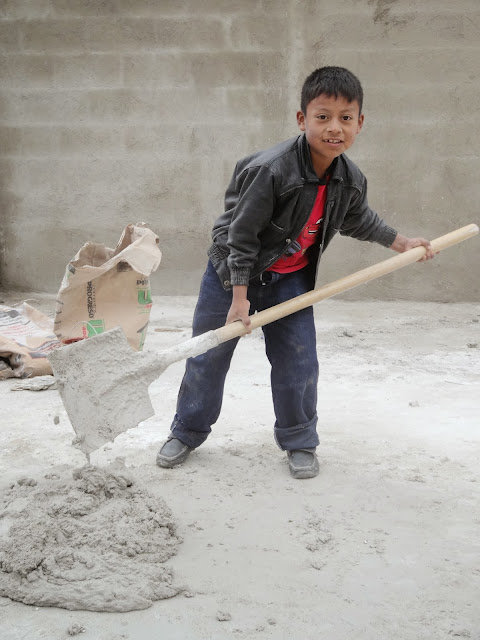 Seven year old "Little" Carlos came to work with his father today and knows how to do all the concrete and stucco jobs and didn't waste any time showing Diana and I the proper way of doing things. 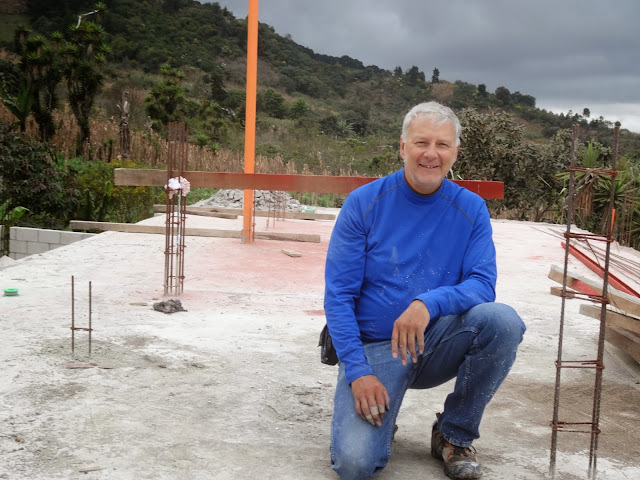 Little Carlos was also a great photographer, having taken many of the pictures today. 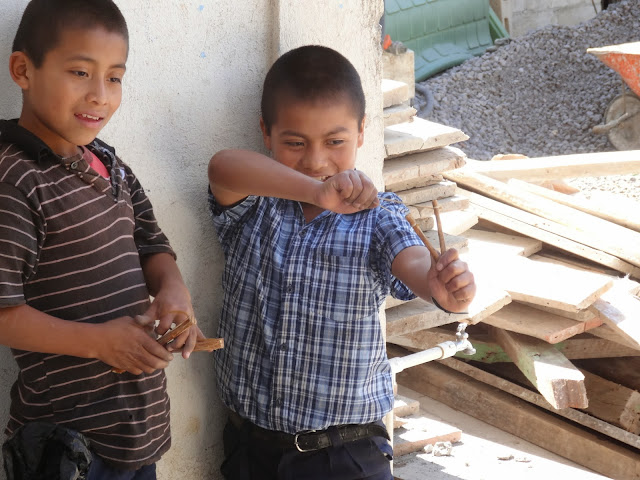 Eric lived directly across from the school and usually visited us multiple times a day with his friend Luis. This day they had their slingshots and used spent firecracker casings as ammunition. Both of them were extremely accurate shots as I set up targets for them to shoot at. 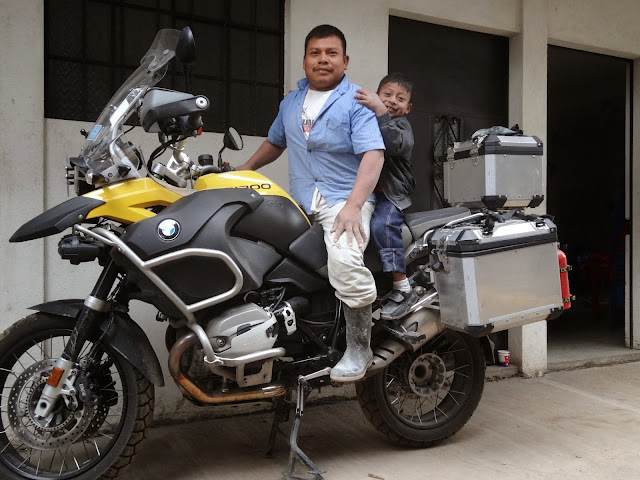 Carlos, who was the foreman with Little Carlos posing for their picture. We are having pictures of the guys sitting on the bike printed and delivered to the job site next week, we know they will cherish the memory.
The temperature in Antigua has been great for working, mornings in town were usually 16 C. and on the job site it was 12C. due to the elevation change, warming up to about 21 C. and only one afternoon with a light drizzle.﻿
Posted by Ken at 5:01 PM