Had another late start today, we're really getting good at these! Finally we are on the road at 11:00 after getting photo copies of all our documents in Antigua as we need to cross into El Salvador and want to be prepared when we arrive at the border.

We arrive in Escuintla about noon and as usual there are no street signs and if there was without GPS it is impossible to find your way, keep in mind that you have a two lane highway reduced to barely one lane zig zagging through the city. We arrive at a T intersection and are unsure as to turn left or right so we pull into a McDonalds parking lot. A family parks beside us and can see our confused looks, their teenage daughter is the only one who understands a little English and within a few minutes she indicates that they will show us the way. So, away we go, following close enough that no other vehicles get between us and their car. It takes about 20 minutes to get through the most chaotic part of the downtown core before they pull into a gas station and point us in the correct direction while yelling "DIRECTO, DIRECTO". Every day we are treated to kindness from total strangers.

Once again there are lots of "helpers" at the border crossing but only one pair can keep up to us on the bike as we weave in and out of semi's (about 100 of them waiting to cross the border) using both shoulders, the wrong side of the road along with white lining when necessary. Eventually the helpers get in front of us and take the lead to get us to the Guatemala customs office. We get stamped out of Guatemala and cancel our tourista permit in very short order. The El Salvador customs is a different story, I spend an hour & 45 minutes waiting and about 15 minutes on paper work and getting scanned into their data base. The wait time at borders is always an opportunity to meet and talk with people. Today it was a guy from Australia who started in Canada and has been on the road for 9 months, travelling by Land Rover. Another gentleman I met is a Salvadorian but works in Los Angles, coming home for Christmas he rolls his car on black ice outside Albuquerque, New Mexico and restarts his trip using a friends truck. He has lots of advice for me on getting through customs, what to pay the helpers, where to stay at the next town and recommends where to eat. In the end the helper wants $40 for both border points which is $35 more than what I've been advised to pay. After a few minutes of negotiating I give him $10 and explain to him that I know the rates and he should be happy getting double the normal rate, he grins and moves on looking for his next client or perhaps victim. Diana uses the time to visit with people as well. On this day she meets Jose who is picking up his sister at the border. Jose is from San Miguel, El Salvador and has a life story we have heard so many times before. He entered the USA illegally when he was 17 years old, worked in Washington, DC and Boston as a carpenter before being deported 17 years later. All 5 of his children were born in the USA and still reside there. His eldest daughter is assisting him to apply for a work visa so he can return to be with his family. Hoping to save enough money in the next 5 or 6 years for the return trip he drives semi truck between Panama and Guatemala.

December 18th
El Salvador has a beautiful country side; we experienced everything from forested areas, farming communities and the Pacific Ocean. The country seams more modern than Guatemala and Mexico with less pollution, traffic lines on the highways and highway signage which is extremely rare in Guatemala. While passing through a town today Diana's voice comes over the intercom: " I must be losing it, I thought I saw a sign for Wendy's", well; there it is, a modern Wendy's, we just had to stop for a Frosty as it was 35 degrees with lots of humidity. 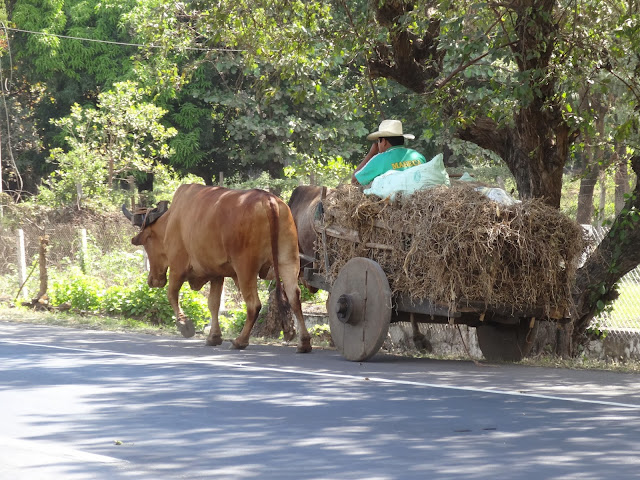 It's obvious to both of us that the livestock here is much healthier than we have seen in both Mexico and Guatemala.
We arrive in San Miguel about 1:30 and see a brand new Comfort Inn, it's out of our budget but we negotiate the price down to $61 USD and take it for two nights as I need some rest before taking on Honduras. Finally Wi-Fi that works in our room, air conditioning, hot water, a mattress that you can actually sleep on, two shotgun totting security guards in the parking lot and a toilet with a seat. (we usually spend $16-$35 per night), which in some cases actually gets you a very nice room.

We had breakfast at a roadside café overlooking the Pacific Ocean.

San Miguel market, 6 blocks of anything you might need.